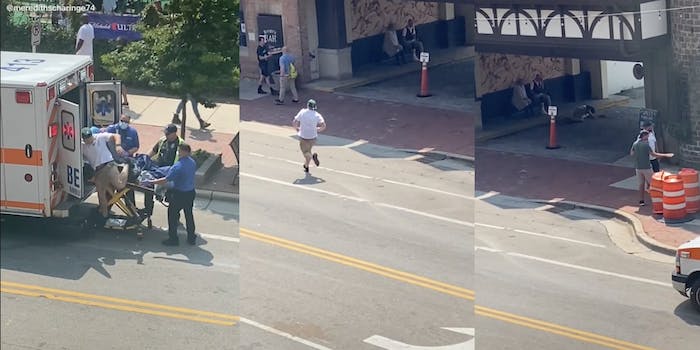 ‘When you live in the U.S.’: TikTok of man jumping off stretcher and running away from ambulance goes viral

'He chose not to be in debt the rest of his life.'

The unfortunately high cost of medical care in the U.S. is no joke—a viral video may show a man running away from an ambulance to avoid being billed for a trip to the hospital.

In the video, a man in khaki shorts and a white T-shirt pulls himself away from emergency medical service workers before running away, then falling over. Posted by @meredithscharinge74, the video has garnered nearly 200,000 likes and 5 million views on TikTok.

Though it’s unclear exactly why the man is running away from the ambulance, many in the comments section of the video are suspecting he was attempting to avoid having to pay for the ambulance ride, hospital stay, or medical treatment. Even with insurance, a trip in an ambulance can cost $450. If you need to be airlifted, that cost can shoot up to $21,700 after insurance.

“I’d do the same thing if people were trying to put me in an ambulance,” @finnegantheferal wrote. “Ain’t no way I’m paying for that wee woo taxi.”

Other commenters remarked on the cost of the ambulance itself, which may be prohibitively expensive for some. “He chose not to be in debt the rest of his life,” @tylrose wrote.

People are generally remarking on how dystopian the healthcare system in America can be. “When you live in the U.S. and they try to take you to the hospital,” one said.

In addition to fleeing a major medical bill, the man ran into a waiter carrying a full tray of food, and some doubt that it was a total accident. “The fact he clearly saw the waiter and circled back just to do that,” one commenter wrote.

Others pointed out that from the server’s perspective, that had to have been quite an experience.

“The server explaining how someone came out of ambulance/stretcher and knocked down the food is literally my life,” @elliezuck wrote.