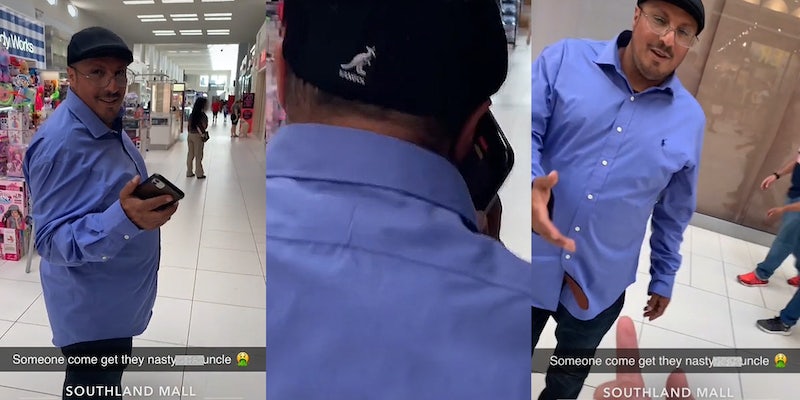 ‘Thank you for protecting women’: TikToker goes viral for confronting man allegedly pretending to be on the phone in order to film mall patrons

A TikTok that allegedly shows a man at a mall pretending to be on the phone while secretly recording video has gone viral. The video, posted by a TikToker who goes by Jaime (@jaime.510), has over 2.2 million views since being posted on Monday.

In the video, Jaime confronts the man, calling him out for allegedly “recording girls in the mall.” The video appears to take place at Southland Mall in Hayward, California.

@jaime.510 I didnt know how to react in this situation i just wanted bro out the mall 🤦🏻‍♂️ Ladies be careful if you in hayward or anywhere in the bay #fyp #bayarea #510 #hayward #southland #fyp ♬ original sound – Ja1m3

“Your camera’s on, brother,” Jaime says at the beginning of the video. The man pulls the phone away from his ear and looks surprised, though it is later revealed that he is not currently on a call.

“You’re not even on the phone, brother,” Jaime continues. “What’chu doing? You on that weird shit…You was recording.”

The man protests, but Jaime interrupts him.

“Watch out before I tell security, bro,” he says.

After a bit of interaction between the two of them, Jaime instructs the man to leave. The man complies, with Jaime following him to the exit.

In comments, Jaime claims that he posted the TikTok as an “awareness video” and that he eventually told security, who “had [him] send them screenshots of his face to the mall security phone.”

“Thank you for calling him out,” wrote one user. “You can’t imagine how often this happens.”

“Thank you for protecting women,” another user added.

“You must have sisters but this is a whole level of respect you have for women and defending us from men like this,” a third user stated. “appreciate you!”

“I needed someone like this at the gym,” a further user claimed.

Some said Jaime could have gone further.

“Should took his phone and check it,” offered a commenter. “keep them queens safe.”

“I forgot to make him delete that shit,” he wrote in response. “I feel hella bad still. It was just in the moment I shoulda made him [delete] that shit on the spot.”

But other commenters said that he still did the right thing regardless.

As one user wrote, “Don’t beat yourself up about it. You still spoke up. It’s something most won’t do. Thank you.”

The Daily Dot reached out to Jaime and Southland Mall via email. They did not immediately respond to the request for comment.