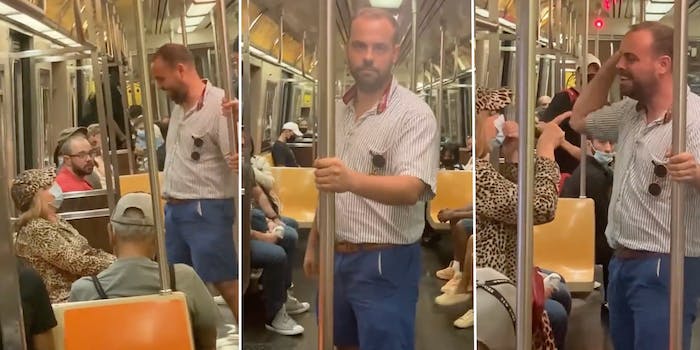 ‘This was absolutely unacceptable’: TikTokers expose man who harassed a masked elderly woman in viral video

The man also went viral on Twitter, where folks called for him to be fired from his job.

A man who proved his anti-masking “virtue” by yelling at an elderly woman on a subway—and then yelling “1776” and declaring “I respect freedom”—appears to have been exposed by a TikToker who answered the call to determine the man’s identity.

The original incident was uploaded to TikTok by a user named Naviko, but it has since been taken down from the platform. However, Naviko also shared the footage to Twitter, where it also went viral. Naviko tweeted, “We need to find out who this guy is and where he works because this was absolutely unacceptable. Unhinged #antimasker #Antivaxxer bullied an elderly woman on the #subway #NYC today.”

The video shows the maskless man getting in the face of an elderly woman on a subway car who said, “I wish the police would come and give you a $50 fine”—presumably because he wasn’t wearing a mask. She asked him to get away from her, but he proceeded to chant “1776” and demanded she sit back down as she tried to stand up to him. When the older woman told him he was disrespectful, he said, “Do you know what I respect? I respect freedom.”

The footage was also shared via the @auntkaren0 TikTok account, prefaced by the TikToker saying, “If yelling ‘1776’ at an elderly woman on a subway is your idea of a good time, then you may be this gentleman here.”

After showing “highlights” of the clip and mocking the bully for ironically unpatriotic clothing, the TikToker said, “And as I always say, TikTok, the devil works hard but we work harder, and I need your help identifying this clown here.”

Within three hours of posting the TikTok on Monday, TikToker Savannah, better known as @rx0rcist, claimed to have sleuthed out the identity of the harasser.

“Don’t worry, bestie, I got you,” the video started. “Everybody, meet 27-year-old New Jersey native Ryan Bartels. Ryan thought it would be appropriate to harass and verbally assault an elderly woman on the subway over her mask, so I did what any sane person would do: I found your mom and sister and told them what you did.”

She then said, “It also looks like at some point you worked at a CarMax in Richmond, Virginia, so just in case you’re still there, I let them know too.” She then encouraged anyone who might know where the man currently works to reach out to either her or Aunt Karen.

“And next time, reconsider being a piece of shit in public,” she advised, adding, “Also, wear your fucking mask and get vaccinated. That’s literally the stupidest hill to die on.”

In the comments, one person claimed that the harasser in question is still employed by CarMax, leading the Savannah to respond, “Not for very much longer.”

The comments also held two dominant strains of discourse. The first was that the man appeared to be aging far beyond his alleged 27 years (which one observer attributed to his being hateful), and the other being disappointment that the people on the subway car in the original video didn’t seem very willing or eager to come to the harassed woman’s assistance. To be fair, however, the original poster Naviko did appear to approach and confront the man, who gave the poster just as much flack.

There was also a lot of praise for Savannah’s actions. “Just saw the original video earlier today and watching this was so satisfying,” a commenter said, before exclaiming, “Justice for all, baby!”

When contacted by the Daily Dot about Bartels, representatives for CarMax stated, “This individual has not worked for our company since May 2021. At CarMax, we value treating everyone with respect and this behavior does not represent our values.”

The Daily Dot attempted to contact Bartels, but he could not be reached. Savannah did not immediately respond to the Daily Dot’s request for comment.