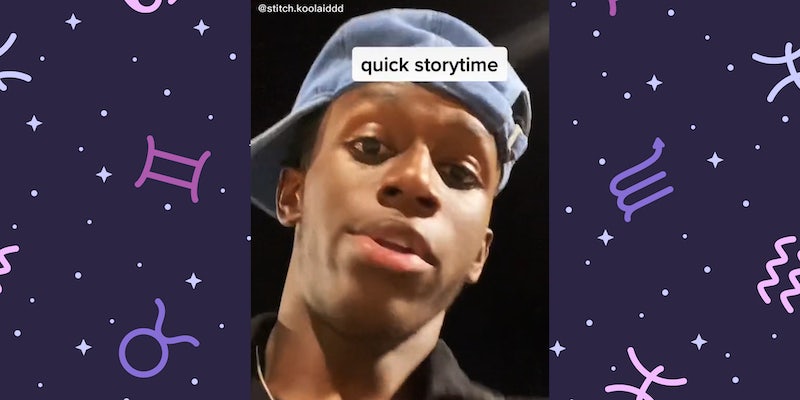 'I told her I had to go to the bathroom and I literally left.'

Astrology is a heavily debated topic in the dating world, with some people demanding to know your sign before they meet you, and others taking no stock in the stars.

In a clip posted by @stitch.koolaiddd, the TikToker talks about a date he went on, and how he decided to walk out on it because the girl blamed an ex’s star sign for his abusive behavior.

The video opens with text overlay that reads, “story time” as the TikToker gets into the details.

“She says her ex was a gangsta dude, he used to beat on her, rape her, cheat on her, all that stuff.” He continues, “Me, I’m feeling bad, I wish that on no girl. She then says, ‘It’s because it was God’s way of telling me what type of dude I should stay away from.’ I instantly agree. I say ‘Yeah, them gangsta dudes’, I’m saying ‘sometimes they not good for you’. She cuts me off and says ‘no, I like gangsta men. I just can’t mess with another Gemini because they’re toxic.’ “

He then goes on to say “Gemini got no shit to do with that! I told her I had to go to the bathroom and I literally left.”

The video was posted on July 23 and has since accumulated over 2 million views, with commenters largely agreeing with the TikToker’s decision.

“Not blaming their actions on a zodiac sign.. i would’ve left too,” one commenter said.

Another joked, “I bet when she found out you left she said: ” mmm he must’ve been a Gemini.”

A third added, “She blamed that on his sign….Ahhh I see the mall is open, but ain’t nobody in there shopping….”

@stitch.koolaiddd later posted another TikTok making fun of people who believe in astrology, but also clarifying he paid for the meal before he ghosted.

The Daily Dot has reached out to @stitch.koolaiddd via TikTok comment.