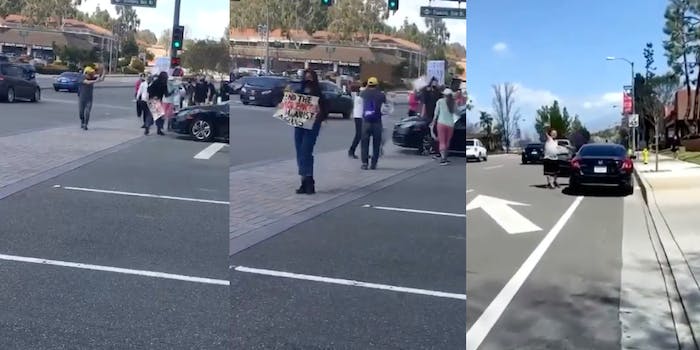 Police are investigating the incident as a hate crime.

A white man was caught on video shouting, “Fuck China!” as he drove through a crowd of protesters at an anti-Asian violence rally last Sunday, less than a week after the Atlanta-area shootings that largely targeted Asian women.

Over the last year, the United States has seen a sharp uptick in instances of anti-Asian hate and violence. Stop AAPI Hate, a nonprofit organization that tracks incidents of racism and xenophobia against Asian Americans and Pacific Islanders in the U.S., recently put out a report tracking hate incidents targeting Asian Americans. The organization found at least 3,795 reported instances of hate against Asian Americans between March 2020 and February 2021, but the real number is presumed to be much higher.

In response to this rise in racist violence, Asian communities and their supporters across the nation have organized to push back. It was during one of these protests, in Diamond Bar, California, that a white man driving a black Honda Civic—a Japanese car, as many people pointed out in the comments—attempted to drive through a crowd of protesters.

A video shared by Instagram user @idalingi shows a crowd of masked protesters carrying signs in downtown Los Angeles. As they begin crossing the street, the black Honda can be seen stopped much closer to the crosswalk than any of the other vehicles. Several protesters appear to exchange angry words with the driver, before he begins to pull forward into the group.

The protesters, all on foot, maneuver out of the way as the man purposely drives through them. Thankfully, he doesn’t injure anybody. The man then performs a swift U-turn before pulling off to the side of the road to park. He shouts, “Fuck China!” as he passes the protesters.

A second clip, shared by Instagram user @bellikemike, shows the aftermath of Sunday’s incident. As @bellikemike approaches the driver, an older white man, while filming, the driver waves in his direction.

“Bye, fuck China,” the driver says. He repeats the sentiment before entering his vehicle and departing with a final “fuck you.” @bellikemike also includes a photo of the man’s license plate in his post.

The Los Angeles Sheriff’s Department is investigating the incident as a hate crime, according to BuzzFeed News. The man in the video has not yet been identified.