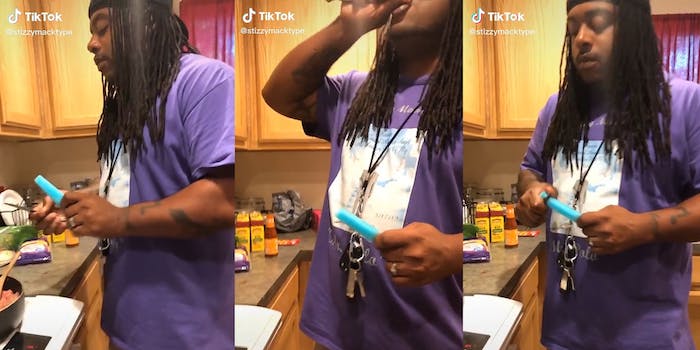 ‘Never caught lacking’: Man cuts up popsicle so he doesn’t have to suck on it, sparking debate

A viral and controversial TikTok video is sparking a debate among viewers about the proper way for a man to eat a popsicle.

The TikTok creator wrote a homophobic caption along with the TikTok video which has grossed over 3 million views, 403,500 likes, and over 4,000 comments:  “I don’t suck on popsicles 🚫 That’s Gee Aye Why.”

Many viewers in the comments expressed their opinions on the popsicle-eating tactic.

“You’re at home with family bro chill 😂 like girls know not to eat banana or popsicles around any male,” replied @cloudy_dreamz420.

“Never caught lacking,” someone joked. Another observed: “Haha I eat mine in a dish with a spoon.”

In his defense, @stizzymacktype replied in the comment section that he was just having a fun moment with his daughter.

“😂 people on here are too serious with these hate comments. Just me and my daughter in the kitchen cooking n enjoying each other’s company 🤷🏽‍♂️,” replied @stizzymacktype.

Joke or not, the clip is rooted in dated masculine norms that regularly become viral flashpoints. Relatedly, this week popular YouTuber Kevin Samuels passed away. His rhetoric is responsible for men all over the world thinking harshly about gender roles, fatphobia, and misogynistic views that sparked controversy all over social media. As NBC News noted: “His views, which many people on social media felt were an attack on Black women, often sparked outrage. Last month he was slammed over a video where he labeled women who are over 35 and unmarried as ‘leftovers.'”