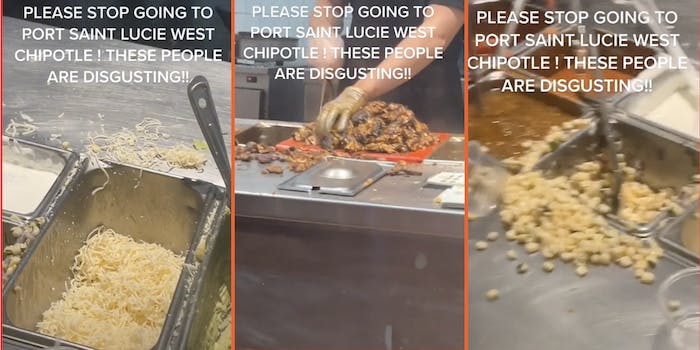 ‘If you got a problem fill out an application’: Customer tries to shame ‘disgusting’ Chipotle workers in viral TikTok, sparking debate

In a viral TikTok, Justin Orejuela (user @jayothebarber) criticized the cleanliness of a Chipotle in Port Saint Lucie, Florida, sparking debate from other TikTok users who overwhelmingly supported the workers.

“PLEASE STOP GOING TO PORT SAINT LUCIE WEST CHIPOTLE ! THESE PEOPLE ARE DISGUSTING!!” Orejuela wrote via text on the TikTok.

The video shows several spills of ingredients on the countertop and one worker quickly cutting a large pile of meat. Since being posted on Dec. 21, Orejuela’s TikTok received over 3 million views and a wave of criticism from other users through thousands of comments.

Several users empathized with the Chipotle workers’ situation during an apparent rush.

“They’re obviously understaffed and overworked. if u got a problem fill out an application…” one user urged.

“But then if they start cleaning during a rush you’ll complain that you’re waiting too long,” another argued.

“Clock in and help me clean den if u think it so easy to clean during a rush,” a third said.

Others claimed that Orejuela must not understand what it’s like to work in fast-food service.

“This is why I think everyone should work on fast food at least once in their life,” one user said.

“I don’t see nothing nasty that’s how it is when it’s busy. You’ve never worked in a fast food place before [have] you?” another said.

However, Orejuela said in response that he was a former employee of that exact Chipotle location.

“I was the kitchen manager at this location. Lol so your comment is invalid. It was never like this when I managed. How don’t you see it [as] nasty?” he said.

Orejuela also created multiple follow-up videos, wearing a Chipotle T-shirt in one and showing a pile of dishes in the alleged backroom of that location in another.

However, a few users felt similarly uncomfortable with the cleanliness of the Chipotle and showed support for Orejuela in the comments.

“How are y’all mad the creator? We just letting businesses have zero standards now?” one user said.

“Y’all Trippin in these comments … I’ve never seen a chipotle THAT messy in my LIFE,” another said.

The Daily Dot reached out to Orejuela via a TikTok comment and to Chipotle via email.