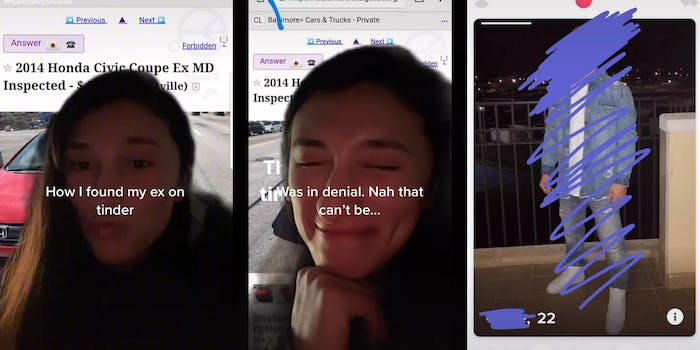 'The fact that he was the first swipe killed me.'

A TikToker’s story about how she found out her then-boyfriend was living it up on Tinder is prompting other users to share their own stories about the digital age outing their cheating significant others.

Three years ago, when this all went down, Hannah (@hannahclarkieee) says her boyfriend sent her a screenshot of a car he wanted her to purchase off Craigslist. But he should have just sent the link, because a few hours later, when she was looking at it again, she noticed something strange.

Up in the corner, she clocked a “weird flame” icon. Upon further research, she realized it was the symbol for the Tinder app, and its location signified that it wasn’t just on his phone, but that he had recently had it open.

So Hannah downloaded Tinder for herself, only to immediately be confronted with her boyfriend’s profile.

“The first fuckin swipe,” she wrote.

Dating apps and internet history have outed many an unfaithful suitor in recent years, and Hannah’s story was unfortunately all too relatable for many viewers.

“One time my ex didn’t answer my FaceTime because he had 2% battery so he sent me a screenshot to prove it and forgot he had the bumble app,” @honeybonni shared.

“My ex sent me a picture of a pair of shoes he was going to buy me and the Hinge option was right on the top left lmaoooooo,” @yaxayraa said.

Several viewers had stories about their friends coming across their boyfriends’ Tinder profiles, prompting @keila.sdm to add, “I don’t get the thinking when people cheat by putting THEIR PHOTOS ON TINDER. How do you expect not to get caught??!”

Fortunately, this incident happened long enough ago that Hannah has since moved on, noting that she is “with an amazing man now” and opted to rehash the past because “this story was too good not to share & I kno other ppl have gone thru somethin similar.”

Based on the comments, she’s absolutely right—and these cheaters always seem to find a way to get caught.

The Daily Dot has reached out to @hannahclarkieee via TikTok comment.