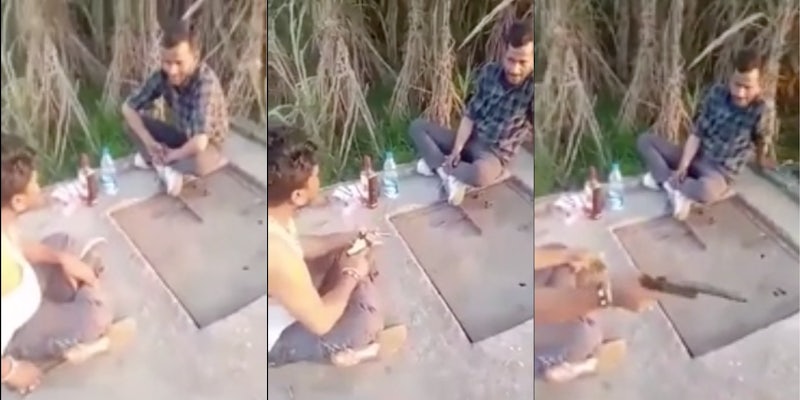 The video shows the man picking up a pistol, loading it, and shooting his 19-year-old nephew.

A shocking video shows an Indian man picking up a pistol, loading it, and shooting his 19-year-old nephew dead as he was recording a video in Muzaffarnagar, in the state of Uttar Pradesh, India.

The 30-second video, which has been posted to Reddit’s r/ActualPublicFreakout page, shows four men seated around a tubewell and drinking. Bottles of alcohol can be seen in the video.

However, they also casually pass a well-worn pistol around. The men are laughing and talking, with the videographer documenting a good time amongst friends. That is until one of the men picks up and apparently loads the pistol. He points the gun at another man and shoots him. The phone falls from his hand, with pained groans being heard. Another man in the video watches the event transpire without a hitch.

According to NDTV, the departed, identified as 19-year-old “Prince,” is reportedly the shooter’s nephew.

According to the report, the unnamed shooter was arrested, with Muzaffarnagar city police searching for the other men seen in the video. The accused also reportedly claimed he was casually “checking out the pistol” when he inadvertently shot his nephew. After viewing the video, people online are expressing their doubts.

“How was this an accident? the dude literally loaded a bullet into the cylinder and pointed it at the camera man before pulling the trigger. this looks more intentional than it does an accident,” user u/AlternateAccount1277 commented.