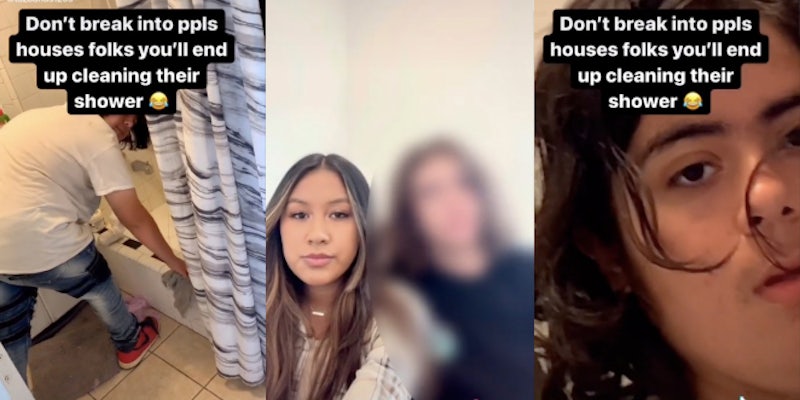 ‘It’s either that or the cops, bro. You came into my house’: Homeowner makes man clean his shower after allegedly breaking in

'I still see some spots right there.'

In a viral TikTok, a young man who allegedly broke into a TikToker’s house cleans the home’s shower as punishment.

TikToker @tazbands1209 posted a TikTok on Aug. 17 showing a young man cleaning his shower. The man is complaining about having to clean, and @tazbands1209 says: “It’s either that or the cops, bro. You came into my house.”

The man doesn’t push back on the claim and continues to clean.

“You wanted to break into my house,” the TikToker says when the young man protests cleaning up hair on the shower, arguing that it’s not his own hair and “nasty.” “Keep going, bro.”

On Thursday, @tazbands1209’s video had over 2 million views.

Don’t be surprised when you get caught 🧼

In the video’s comments section, @tazbands1209 said that the man is his neighbor. “I’m not one for police or nothin,” @tazbands1209 commented. “I just wanted to add insult to injury.”

In a follow-up video, the TikToker says that he came home mid-morning to feed his dog and found the man in his house and that there has been a history of issues with the neighbor. The TikToker also says he didn’t call the police because he didn’t want the neighbor, who @tazbands1209 says is a minor, to have a charge on his permanent record.

“‘If you need things, you go work for them. You earn them. You don’t take them from other people,'” @tazbands1209 recalls telling the neighbor.

Many commenters on @tazband1209’s viral video thought his idea to have the neighbor clean his shower was hilarious.

“He is never gonna forget this,” @bornaquarius1 wrote, adding in a laughing emoji. “Or probably never tell anyone.”

And while many commenters said they would have still called the cops—especially after the neighbor talked back to @tazband1209 while he was cleaning—others commended the TikToker for giving the man a break.

“Teaching him discipline and respect will help him but calling the cops would’ve took any opportunity he had left. Respect,” @eskettles3 wrote.