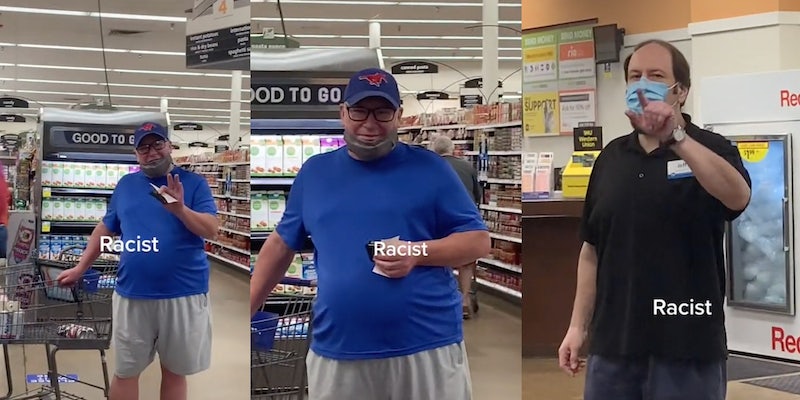 ‘This racist sh*t is getting out of hand’: Black Instacart worker allegedly harassed by white men at Kroger

A Black woman in Texas was allegedly harassed by at least two white man at a supermarket while she was working for Instacart, according to her TikTok posts on the incident.

TikToker @deekotapa0 shared a video of the incident on Saturday, and it has since been viewed more than 200,000 times. It reportedly took place at a Kroger store in Dallas.

At the beginning of the video, she is seen yelling at a white man in a blue T-shirt. It appears the alleged harassment already took place, and she is filming herself confronting the men in the aftermath.

The man tries to say something, and she cuts in, “You wasn’t here 15 minutes ago.”

According to followup videos posted to her account, she said that after she arrived at her self-service checkout, she realized she left her card at home. She said she left the store to go get it. The harassment, she said, occurred upon her return.

In the first video, in which she recorded the incident, she says that she was doing her Instacart shopping, “and he walked up behind me, OK.”

At this point, she pans the camera around to show a white man in a black T-shirt. It’s not clear in the video which man was allegedly harassing her; the Daily Dot has reached out to her for further clarification and will update the report if she responds.

Another man is heard apparently trying to calm down the situation.

“I hear you, sir, but I’m pissed off because I’m already pissed off with my order, but he walking up behind me, telling people to guard the door,” she says, her camera pointed to the floor. “Before you walked up, the dude with the [inaudible], before you walked up he was talking to somebody already.”

The camera then shows the man in the black T-shirt trying to talk back to her.

“Leave me alone,” she says to him, as he points his finger at her, says something about Instacart, and then turns around and walks away.

“You walking away? You could’ve walked 10 minutes ago,” she says to him.

She turns the camera back at the man in blue T-shirt as he stands by, resting his arm on a cart and smiling.

“And then you? You don’t worry about my daughter, OK?” she says to him.

He tries to say something along the lines of “calm down,” and she asks him to leave him alone.

Another customer from behind her intervenes and expresses their support for the Instacart shopper.

A few seconds later, she is seen checking her goods out at the counter while an employee stands behind.

She has since uploaded a series of videos explaining the incident in further detail. Her videos have been getting reported, according to her TikTok updates. The first explainer she posted was not visible as of Monday afternoon. It appears that despite being reported, her videos were eventually reviewed and cleared by TikTok.

In a second explainer video, she said a man wasn’t leaving her alone and that she’d asked the manager for help.

“I think I said ‘leave me alone’ more than 10 times,” she said, adding that they still didn’t leave her alone.

In another video, she teared up and shared how exhausted she is with racial profiling.

In a later part of the video, she teared up when talking about why she argued with the white men.

“I don’t need my kids growing up thinking they can’t move and be them, period, because of their [skin color] or because of how they act or because they’re speaking their mind.”

People in the comments section shared their support for the woman.

“You were not irrational they need to leave you alone!” wrote one user.

“When we get loud they get scared and hurry up and say we mad and aggressive like hell yeah I am,” wrote another.

“These people just wanna judge. I would do the same thing,” a third commented. “You were being attacked. They had surrounded you. It’s fight or flight. I hate this.”

The Daily Dot has reached out to Instacart and Kroger.