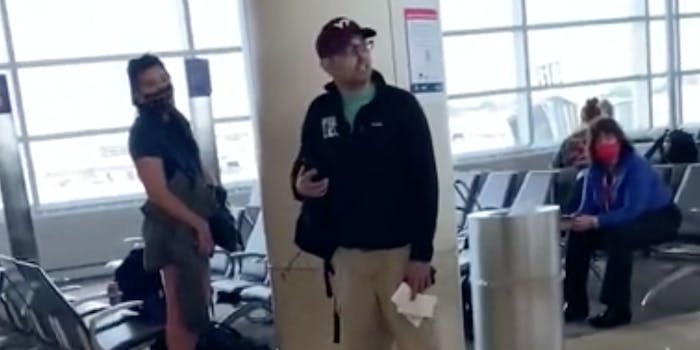 Maskless ‘Airport Karen’ got no support for his foolishness

An anti-mask “Airport Karen” in Chicago’s Midway Airport received no support from the bystanders in his terminal, as he yelled out for police assistance, in a viral video on Reddit.

The recording starts with the male Karen walking through the airport, without his mask, feigning the necessity of police help. He yells though he appears to have no urgency.

“Police help, this motherfucker,” he says, pointing an approaching airport security member, who looks just as one would if he worked at an airport. A woman then speaks up: “Let me guess, you don’t want to wear a mask?”

Another woman tells me he’s making a fool of himself. But he replies that his follower, an obviously-uniformed man with an airport walkie-talkie, has been “trailing” him.

Another woman: “Stop screaming help for no reason.”

The Karen smiles, appearing to understand he’s purposefully a nuisance and doesn’t care about the security officer doing his job to ensure masks are worn in Midway.

Masks are required, per city of Chicago and state mandates; though there is loose enforcement while in TSA lines. Some people on Twitter have noticed the lax nature of masking wearing at Midway.

Nonetheless, this airport Karen, and other anti-maskers, make life difficult for airport passengers and employees.

u/werioton3 wrote: “The anti maskers are always SCREAMING and getting right up in peoples faces, spreading their droplets at higher doses to everyone around them. These poor workers that have to deal with these assholes. Smh.”

It’s unclear exactly when this video was filmed but it went viral Thursday on Reddit.