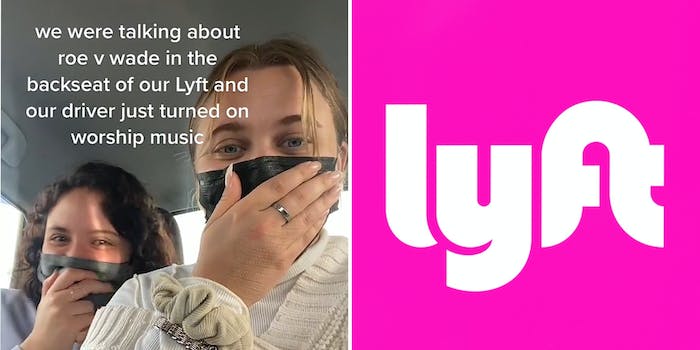 ‘Do not be silenced into making someone else comfortable’: 2 women were talking about Roe v Wade in a Lyft. The driver put on Christian worship music

As the backlash to the leaked Supreme Court draft that would overturn Roe v. Wade continues to rage across the country, people around the world are sharing their experiences protesting and discussing the draft.

TikToker Taylor (@t_gauds) recently shared one such experience on the platform. According to Taylor, she and her friend were discussing Roe v. Wade in a Lyft when the driver suddenly started playing worship music.

The video currently has over 1.2 million views.

In the video, Taylor and her friend can be seen looking uncomfortable as worship music plays.

“We were talking about roe v wade in the backseat of our Lyft and our driver just turned on worship music,” Taylor writes in the text overlaying the video.

In comments, users mocked the driver, suggesting that Taylor rate the driver poorly on the app.

“He definitely told people about this and was all proud of himself,” stated a second.

“They really thought they were doing something with that music huh,” added a third.

Others had suggestions for Taylor.

“Tell him you’re not a part of his little book club,” stated a TikToker.

“Should have started singing WAP,” suggested another.

“Keep talking!!! Do not be silenced to make someone else comfortable based on their religion of choice,” wrote another commenter.

In contrast, some users supported the driver, or at the very least, noted that it was their right to play the music of their choice.

“If the driver wants to listen to Christian music he can,” shared a user.

“His car his choice,” another agreed. “Move on.”

Several users also made pains to note that one can be both Christian and pro-choice.

As one user wrote, “I would start singing to prove you can still be pro-choice and love Jesus.”

We’ve reached out to Lyft via email and Taylor via TikTok comment for comment on this story.