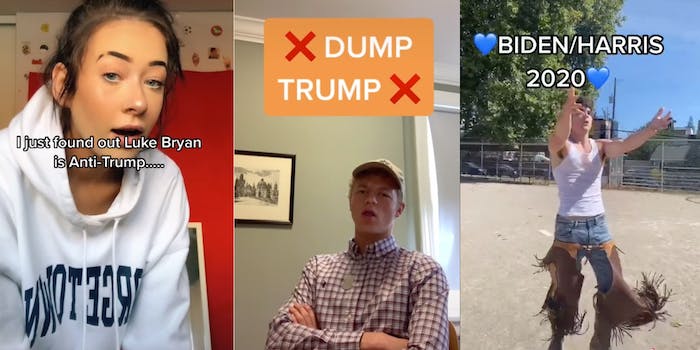 This Luke Bryan song is an anti-Trump anthem on TikTok

TikTokers are sharing their political views, including criticism of President Donald Trump, with Luke Bryan’s song “Country Girl (Shake it For Me).” The audio clip has been used on over 27,000 videos on TikTok.

In one video that uses the song, TikTok user @paulitics1 wears a checkered collared shirt and chain with a dog tag. You might think he’s dressed like a stereotypical conservative, but he clears things up in his video.

“Some of y’all are confused abt my political views,” he wrote on the video. “So here they are…” He then declares, “Black Lives Matter,” “love is love,” “climate change is a major issue,” and “dump Trump.” He also uses the anti-police acronym “ACAB,” which stands for “all cops are bastards.”

TikTok user @genevievelongbrake says that she just found out that country singer Luke Bryan is “anti-Trump.” Suddenly, she says, she likes country music. While some of Bryan’s songs could be interpreted as liberal—including “Most People Are Good,” in which he sings “love who you love”—the singer is careful not to reveal his political alignments in interviews.

“For those saying I’m not a liberal cowboy,” user @cowboyconor wrote on the caption of a video of him dancing in leather chaps and clarifying his political views. Those views include support for Black Lives Matter, pro-choice rights, and President-elect Joe Biden.

Although user @uhitsjaala doesn’t consider herself Democrat, she did use the TikTok sound to agree that “love is love and it’s not a sin,” “there’s a difference between racism and ignorance,” “sex workers are people and deserve respect,” and “the Confederate flag represents racism.”

Thousands of other users have used the song to share their support of basic human rights, regardless of their political affiliations.