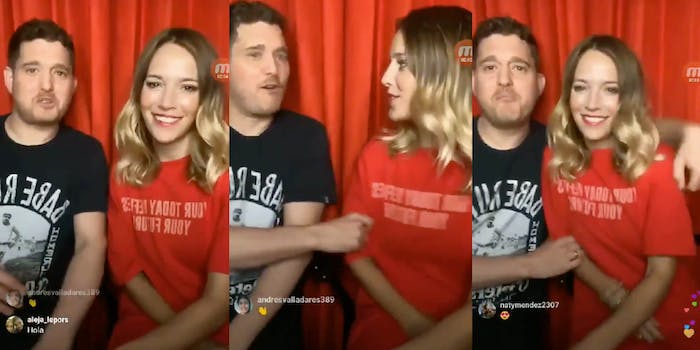 Luisana Lopilato has since responded to fan concerns.

Luisana Lopilato is clapping back at fans for saying that her husband is abusing her.

Lopilato, an actress and model originally from Argentina, posted a statement to her Instagram earlier this week to combat claims from fans that her husband, singer Michael Bublé, was abusing her.

“It is incredible how some human beings are,” Lopilato wrote. “Everyday we go out with my husband to stream live and bring a bit of joy, entertainment, and hope, and we have to deal with hearing and seeing what malicious people who come out saying things about our family without knowing anything about us.”

The accusations started late last week, when fans became concerned with how Bublé was treating Lopilato in one of their many Instagram Live videos.

Bublé can be seen elbowing Lopilato after she interrupts him and then yanking her towards him.

“I don’t know about you, but I saw this and was outraged by Michael’s treatment of Luisana, I was seriously WTF,” one users translated post read.

Other users quickly pointed out his behavior in previous videos that they felt was concerning.

“Michael Bublé demonstrates aggressive behavior towards Luisana Lopilato,’ another user wrote. “Here she takes 2 min to prepare a dessert for the children and he starts the live alone and reacts like this.”

Lopilato was quick to clarify that she trusts and loves her husband and that she would not hesitate to defend her family.

“I want you to know that I have no doubts who my husband is and I would choose him a thousand times more !! It’s not fair!” Lopilato said. “Without more to say and doing what I think is right when they mess with my family, I leave the consequences to God! The world needs more than ever ‘love, hope, values, unity and solidarity’ NOT these types of people.”