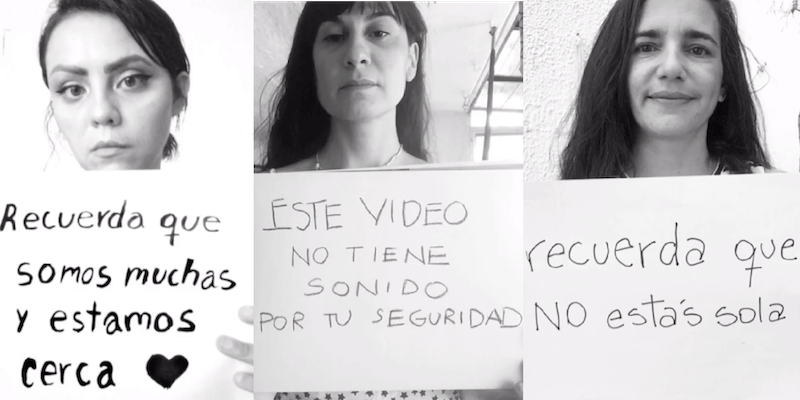 Across the world, data suggests that domestic violence has increased since the coronavirus lockdowns began.

Women in Mexico have gone viral for a video explaining to others what to do if they’re stuck at home in quarantine with their abuser.

The video was published to Instagram without sound so that women could watch it without their abusers knowing.

“If you’re isolated with your aggressor, remember that you are not alone,” the women say via signs that they’re holding. “Remember that we are many, and we’re together.”

Colectivo Hilos, a group of textile artists who advocate for women’s rights, shared the video to its Instagram. The women in the video included some steps others can take if they’re in a dangerous situation. The group is based in Guadalajara, a metropolitan city located in the state of Jalisco.

The group listed a phone number of emergency help for women in Guadalajara. The artists also instructed women who are unable to call to send the Instagram account a message, and the organizers will call for help for the women.

The video has been shared thousands of times, including from the Instagram account Art and Feminism, where it has nearly a million views.

“The reaction [to the video] has been really big–more than what we had imagined, which speaks to the great need in society,” Colectivo Hilos told the Daily Dot.

In the past several months, Mexican feminists and activists, like Colectivo Hilos members, have protested in the streets of large cities and small towns alike to demand the end to violence against women. On average, 10 women are killed every day in Mexico.

Across the world, data suggests that domestic violence has increased since the coronavirus lockdowns began. The United Nations’ Secretary-General António Guterres urged governments to “put women’s safety first” as they respond to the coronavirus pandemic.

In Mexico, the governor of Michoacán Silvano Aureoles Conejo said he’s implemented safety measures for women who are stuck in isolation with a violent person. On his social media accounts, he shared a WhatsApp number woman can contact for psychological help. He also said there is a shelter available for women fleeing violent situations.

“Many women, of all ages, are suffering interfamilial violence,” the governor said in a video he posted to his social media. “The health crisis is a human crisis as well.”

Groups like Colectivo Hilos have also pitched in to share safety information. The women said in a statement to the Daily Dot that the video has created a splash in countries outside of Mexico. The group has also seen activists in other cities across Mexico creating similar videos with localized advice.