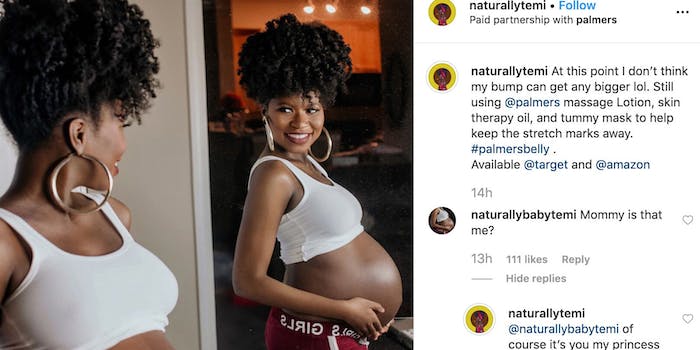 People aren't into it.

Beauty and fashion influencer Temitope Adesina, known on Instagram as @naturallytemi, engaged with an Instagram account meant to be portraying her own unborn child. But she says there’s an explanation for the posts: She isn’t toggling between accounts to talk to herself as many on Twitter are blasting her for, instead, it’s her husband on the other end.

This influencer is pregnant now she’s talking to herself through her unborn child’s Instagram. pic.twitter.com/9mHjiy7mIc

In a paid recent partnership post for Palmer’s Skin & Hair Care products, Adesina shows off her pregnant stomach and advertises her use of Palmer’s massage lotion, skin therapy oil, and tummy mask. The post’s top comment from an account known as @naturallybabytemi reads, “Mommy is that me?” Adesina replied, “Of course it’s you my princess ❤” to the comment.

Critics on Twitter were not kind in their assessments of Adesina’s behavior as they assumed she was simply switching between accounts to have conversations with herself.

This is sending me pic.twitter.com/gI0WgKsN49

Adesina quickly noticed the backlash she was receiving and responded in full force. Adesina clarified that her unborn child’s account is in fact operated by her husband. “My husband created the page for our child and sometimes he goes on the page and he writes me,” said Adesina in an Instagram story.”It’s my baby’s page. I can do whatever I want.”

“This is why social media bothers me, I can’t even do something fun for myself,” added Adesina. The influencer currently boasts nearly a quarter of a million followers on Instagram and has posted 12 separate times this month.