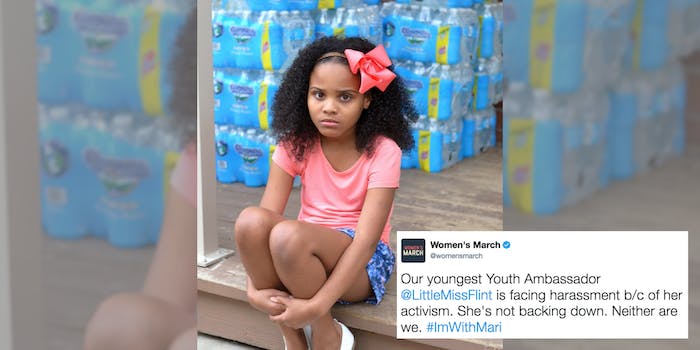 As a child, being the subject of bullying is extremely isolating and hurtful. But when the bullying is coming from adults for attempting to better the community, those comments reach a whole different level of hate.

Supporters of the Women’s March on Washington and Little Miss Flint are using the #ImWithMari hashtag to virtually stand in solidarity with Flint, Michigan activist Amariyanna “Mari” Copeny after she opened up about her experiences with cyberbullying in a speech to a sixth-grade class.

Last Tuesday, 9-year-old Copeny shared a video on Twitter of her speaking about bullying and how to respond to it.

The first time she was ever bullied, Copeny shared, was in kindergarten, when some classmates made fun of a speech issue she had. Now, in fourth grade, she experiences the same kind of shaming for her activism in bringing awareness to the Flint water crisis by being a youth ambassador for the Women’s March, as well as speaking at the March for Science. But this time, she said, the hate comes from adults.

“Now it’s not just other kids, but [bullying]’s coming from adults as well—from people that have never met me, but feel they can sit behind their computer to say mean and hateful things,” Copeny said. “Bullying is never OK.”

Copeny told the classmates that should they feel bullied, they should go to a trusted adult. Kids shouldn’t face bullying alone, she said, and she won’t allow bullies to keep her down, either.

“I will continue to advocate for the kids of Flint and all over our country,” Copeny said. “I want you to know that your voice is powerful … You have the power to change the world.”

You are such a great role model for so many! #thankyou #stopcyberbullying

Twitter users replied to Copeny’s video with messages of support and love, and days later, the Twitter account for the Women’s March quoted her video with a more unified front, showing their solidarity with the hashtag #ImWithMari.

Our youngest Youth Ambassador @LittleMissFlint is facing harassment b/c of her activism. She's not backing down. Neither are we. #ImWithMari https://t.co/GsOVCclmv4

Let's show support for @LittleMissFlint! Our favorite 9-year-old activist is being targeted by cyberbullies. We have her back! #ImWithMari pic.twitter.com/S8gRUaznwH

@LittleMissFlint You are a hero! Don't let anyone tell you otherwise. Keep up the fight. Your voice is important. #ImWithMari pic.twitter.com/9f1edaOmec

.@LittleMissFlint is only 9 years old, and she's more dedicated to + engaged in activism than are most adults. #ImWithMari

.@LittleMissFlint we love you. You are my shero! Never forget that we will protect you, honor you and cherish you always! #ImWithMari https://t.co/4BQIjeV0OE

.@LittleMissFlint, you are one of my sheroes. We always got your back. We need your voice so stay focused and stay loud. ❤️❤️ #ImWithMari

@LittleMissFlint stay strong!! We applaud your commitment! Never forget there are thousands of us out here rooting for you! #ImWithMari https://t.co/ZhSiVR0qnd

I'm from Flint and don't know any adults living there who are passionately engaged in any activism! Rock on @LittleMissFlint @womensmarch https://t.co/cuGTGDGJPx

On Friday evening, Copeny retweeted several of the responses to her brief but humanizing speech on cyberbullying and replied with a few #ImWithMari tweets of her own, too.

And this one is for sure—despite the targeted hate against her work to bring clean water to her community, Copeny isn’t backing down.

Just a few actions I have been part of this year with so many more to come#ImWithMari #HatersWontStopMe #RESISTANCE #Mari2044 pic.twitter.com/iU3GxkmY9G

Hello, my name is Mari, I'm 9 years old and from #Flint. One day I will change the world but until then i'll take clean water #ImWithMari pic.twitter.com/2Tlr7DKulW