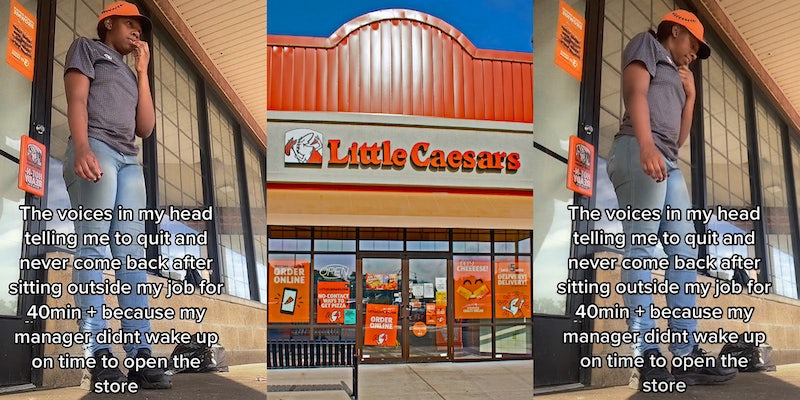 ‘It’s giving we need a new manager’: Little Caesars worker flames manager who left her waiting outside for 40 minutes because they didn’t wake up in time to open store

'Ima give you 10-15 and anything after that you working my shift.'

In a viral TikTok, a worker criticized her manager for being late to work and making her wait over 40 minutes outside. Viewers in the comments section debated how they would have handled the situation.

In the viral video, which has over 108,300 views and was posted in July, a TikTok user (@lavvish.rayy) films herself standing outside of a location of pizza chain Little Caesars in her uniform, with what appears to be half of a smoked Backwoods cigar in her hand.

“The voices in my head telling me to quit and never come back after sitting outside my job for 40min + because my manager didnt wake up on time to open the store,” the TikToker captioned the video. “Its giving we need a new manager.”

Viewers in the comments section debated how they would have handled their manager arriving late. Some said they would not wait that long.

“I would have left..ima give you 10-15 and anything after that you working my shift,” one user said.

“U better than me i hopped on a bus n went 6 states away,” another commented.

Another user said they would wait but demand pay for the time spent waiting.

“I would have took a pic infront of the job send it to her with the. time showing so I get all my money n then sat I’m the car n fell asleep til then,” the user said.

Others poked fun at the TikToker for smoking a Backwoods while waiting.

“That wood [Backwoods] abt half gone, you gave him enough time, go on home,” one user commented.

“It’s the wood for me,” another joked.

Another user said they had similar experiences at work.

“Omg i quit my starbucks job because of that,” the user shared.

“I think it’s almost time for me to quit, honestly,” the creator of the TikTok replied.

Others encouraged the TikToker to “step up into that position” and become manager herself.

“[laughing crying emoji] I dont even think I want it fr,” the TikToker responded.

The Daily Dot reached out to TikToker (@lavvish.rayy) via Instagram and Little Caesars via email.