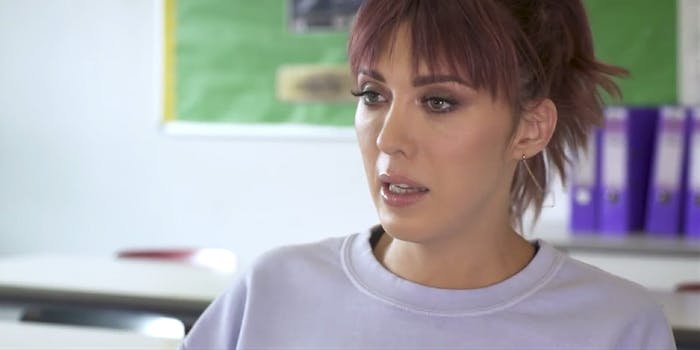 'I think it's really rude to expect me to sit in a studio... with someone who is so openly abusive to women like me.'

Trans writer and activist Paris Lees went viral this weekend after she turned down a paid opportunity to argue with a transphobic editor on live television.

The U.K.’s right-leaning network Sky News had reached out to Lees, asking her to join a discussion with assistant editor Ella Whelan. Previously, Whelan wrote a column targeting a 19-year old transgender woman named Lily Madigan, who serves as a women’s officer for the United Kingdom’s Labour Party. In the article, Whelan not just deadnames Madigan, but also claims Madigan “is not a woman” and refers to her by he/him pronouns. So Lee, familiar with Whelan’s prior work, vehemently rejected Sky News’ paid offer.

“I think it’s really rude to expect me to sit in a studio and have an ostensibly civilized discussion with someone who is so openly abusive to women like me,” Lees wrote to a Sky News contact. “I also think it’s really irresponsible of you to invite Ella on as it’s disgusting to see someone profiting from bullying a 19-year-old trans woman. I want absolutely nothing to do with it.”

Suffice to say, that didn’t stop Rupert Murdoch-owned Sky News from inviting Whelan on anyway. In the meantime, however, Lees’ response went viral, with many agreeing that trans women shouldn’t be forced to debate their womanhood with bigots.

Yeah. Screw that. I barely wanna be on the same planet as Ella Whelan let alone be in a debate situation with her.

Some trans activists pointed out that “no platforming,” or shutting out debates with transphobes, is the only way to stamp out transphobia from the mainstream media. In other words, if Sky News wants trans guests on, then they need to play by trans guests’ rules.

The message that it's okay to question trans people's personhood?

Oh, yeah, and it doesn’t help that Sky News’ pay rate is low for guests. £75 to £100 pounds roughly translates to $100 to $133, making the appearance rather cheap relative to the amount of emotional labor Lees would exert to engage with a bigot.

you couldn't even get a decent facial for that

This isn’t the first time that Lees rejected a speaking arrangement, either. She previously turned down a BBC Newsnight debate because the conversation allegedly veered toward whether “trans people’s right to exist” and “express themselves” is valid. Lees also pulled out of a panel with the Wilderness Festival because she was placed in a debate alongside transphobic writer Sarah Ditum without her prior knowledge, according to Lees’ tweets.