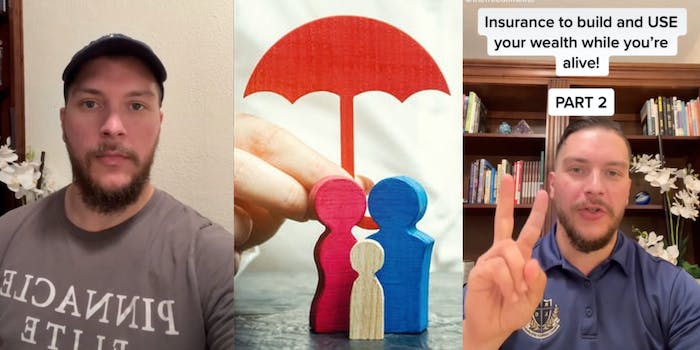 ‘You’re telling me all these people unalive spouses for no reason’: TikToker’s video on using life insurance while still alive goes viral

'My family friend used his to buy acres and build a home.'

The common understanding of life insurance is that one’s family can only benefit from it after the insured has passed away.

However, a TikToker has recently gone viral after claiming that this is not true, and there are many ways one can benefit from their life insurance plan while they are still alive.

TikTok user Tony of The Freedom Elite (@thefreedomelite), who has 30,000 followers and refers to himself as a wealth strategist and mentor in his bio, made the claim about a week ago, accumulating over 8 million views in the process.

The video is a stitch with user @noellelevans, who says, “You’re supposed to use life insurance while you’re alive.”

“She is absolutely right,” Tony adds. “We have been lied to about the effects and impact of life insurance and how it works. Since the 1980s and beyond, life insurance is for life, not death.”

“Learn to use it the way it’s designed, just like how the wealthy do,” he concludes.

In the comments section, users were skeptical, with many citing the oft-referenced trope of murdering someone to claim their life insurance payments.

“You’re telling me all these people unalive spouses for no reason,” one user asked.

“There are a dozen other better ways to use your money,” a second user claimed. “Every single time I see someone trying to talk up these policies sell the policies..”

“Obviously this is an insurance salesman that pockets your overpriced monthly premiums for years before you build any cash value,” another alleged. “Buy term life only.”

However, some shared their own stories about how they took money from their life insurance policy to get out of financial trouble.

“My family friend used his to buy acres and build a home,” a commenter claimed.

“I was an insurance agent,” another user claimed. “You can use your life insurance to buy a house. just as long as you continue to pay the premium.”

“I had to take out a loan on my life insurance so I didn’t become homeless a few years back,” a third user wrote. “I was so thankful.”

@thefreedomelite later posted a follow-up video attempting to explain how exactly this works, though many users criticized the video for being unclear.

While the video is not as straightforward as TikTokers would have liked, it seems to be echoing claims made across the internet on the topic, such as in this article in Fox Business.

Next, one can simply take money out of their life insurance policy. This does have downsides; the final payout after death will be less, and the person who withdraws may also have to pay taxes on their withdrawal.

Third, one can simply surrender their policy and receive the cash value, or sell their policy to a third party. Both of these options have drawbacks, including fees or receival of less money than the prospective payout if the policy was kept.

Finally, the option that a majority of users on TikTok seem the most excited about involves borrowing money from the cash value of one’s life insurance policy.

According to Fox Business, borrowing against life insurance uses the cash value of the plan as collateral. This effectively means that one is borrowing from themselves, which means they can do so with no credit checks and low interest rates, as well as potentially having a flexible repayment plan.

While users seem divided on what to do with this information, many cited frustration with their financial illiteracy.

“My husband and I are 27 with three kids and know NOTHING. This is a foreign language to me,” one user wrote

The Daily Dot reached out to Tony via Facebook direct message.