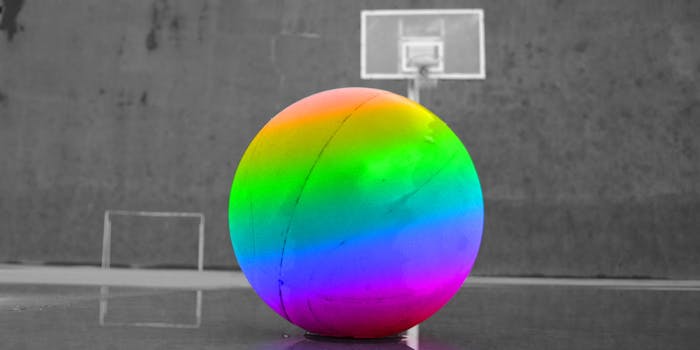 While you’re cheering for your favorite basketball team, a coalition of more than 80 civil rights groups are rooting for the National Collegiate Athletic Association (NCAA) to divest from colleges they say are using sneaky red tape to discriminate against LGBT students.

For March Madness, the group Campus Pride has created a different kind of bracket: It’s called #ShameList, and it’s made up of religious colleges and universities that have requested the government waive Title IX’s federal anti-discrimination protections from their campuses. According to Campus Pride and the 80-plus civil rights organizations that signed on to a letter addressed to the NCAA, those schools are using Title IX waivers to get out of having to treat LGBT students like everyone else.

“Religion-based bigotry is the basis for the vast majority of prejudice and discrimination LGBTQ people face, especially young people,” said Shane Windmeyer, executive director of Campus Pride, in a statement emailed to the Daily Dot. “The NCAA cannot stand for this outright discrimination among its member institutions and we urge them to take action to ensure an inclusive sports culture that is safe and fair for all athletes, regardless of sexual orientation or gender identity.”

Title IX was signed into law in 1972 in order to ensure equal opportunities for female students. In the decades since, the law came to represent an ongoing struggle to ensure equal funding for women’s athletics programs and, most recently, anti-discrimination protections for LGBT students. After the Department of Education issued clarifying guidance in 2014 stating that Title IX protections extended to transgender students—specifically their right to access bathrooms and locker rooms according to their gender identities—conservative religious schools began to ramp up applications for Title IX waivers.

As it turns out, Title IX is considered optional—not mandatory—for religious-based educational institutions.

When reached for comment, an NCAA spokesperson did not directly address whether it would consider divesting from these schools. Instead, the spokesperson told the Daily Dot: “The Department of Education’s Office of Civil Rights oversees Title IX and its waiver process, not the NCAA.”

In September, the conservative Christian Legal Society hosted a conference instructing Christian colleges applying for Title IX waivers, and the CLS website offers extensive guidance on “same-sex issues” that colleges are encouraged to copy and paste into their own existing policies.

A similar conservative legal group, Alliance Defending Freedom, offers guidance on its website that challenges the validity of Title IX protections altogether. In a February post titled “6 Myths About Allowing Transgender Students to Use Restrooms of the Opposite Sex,” ADF attorney Matt Sharp wrote that “denying a transgender student access to the restroom consistent with his or her gender identity harms the student” is a “myth,” and adds cases of legal precedent where courts ruled against LGBT students in favor of discriminatory school policies.

According to the LGBT student faith group Soulforce, over 200 schools nationwide hold some sort of Title IX waiver. Campus Pride’s #ShameList mentions 37 colleges that already have the waivers, with 22 more with pending applications. More than half of the campuses listed are members of the NCAA.

“As people of faith or spirit, we call upon the NCAA to act on its stated values as an LGBTQ inclusive organization and divest from these schools who are willfully and intentionally creating unsafe environments for LGBTQ students,” said Jordyn Sun, national campus organizer at Soulforce, in a statement emailed to the Daily Dot. “No athlete should play sports under the specter of fear and discrimination. Instead, these schools should simply follow the law.”

Among the 80-plus organizations that signed the letter pressuring the NCAA to divest from waiver-seeking schools are GLAAD, PFLAG, TransAthlete, the Tyler Clementi Foundation, National Center for Lesbian Rights, and Matthew Shepard Foundation.

The letter is the latest move in the #GiveBackIX campaign, which began organizing students at religious institutions in December.