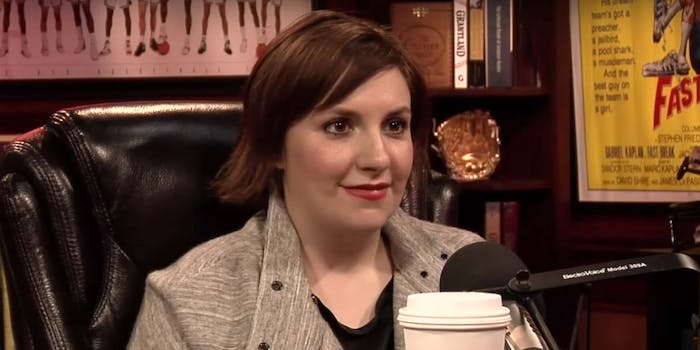 Lena Dunham on why she had to scale back her online habits.

Lena Dunham is one of the most contentious women on the Internet, and the people who dislike her are not afraid to voice their opinions. But that doesn’t mean she has to read those opinions.

On a recent episode of Kara Swisher’s Re/code Decode, Dunham and her creative partner Jenni Konner talked about their new newsletter Lenny and their online habits. Notably, both Dunham and Konner refuse to read Gawker and Jezebel, and Dunham no longer operates her own Twitter account.

Dunham shared that it was Konner who discouraged her from reading Gawker Media publications. “I used to read Gawker and Jezebel in college and be like, ‘I can’t wait to get to New York where my people will be to welcome me,” she told Swisher. “And it’s like, it’s literally if I read it it’s like going back to a husband who beat me in the face—it just doesn’t make any sense for me to do that.”

Though some of Gawker Media’s past stories about Dunham have been ethically questionable, both she and Konner told Swisher that they refuse to read any stories published on Gawker sites, even ones that are not about them. Konner said that she objects to Jezebel’s “snark and cynicism” and refuses to open any links from the site sent her way. Dunham added, “It’s not like we think we’re gonna shut them down by not opening our links, it’s just about not letting [that energy flow].”

Later in the podcast, Dunham shared that she limits her time spent on Twitter as well. “I don’t look at Twitter anymore. I tweet, but I do it through someone else,” she said. “I really appreciate that anybody follows me at all, and so I didn’t want to cut off my relationship to it completely, but it really, truly wasn’t a safe space for me.”

For those who follow Dunham, her comments about Twitter not being a safe space should not come as a shock. Back in January, Dunham admitted to deleting the Twitter app from her phone and told Ryan Seacrest that she did so to “create a safer space for [herself] emotionally.” A quick search of Dunham’s name on Twitter explains why she might feel unsafe; there are plenty of trolls who seem to take pleasure in making hateful and ignorant comments about her.

On the other hand, some are concerned that Dunham’s statements about Twitter suggest a disinclination on her part to participate in critical dialogue. Death and Taxes points out that the last extensive Twitter discussion she participated in took place after artist Molly Crabapple criticized Dunham’s stance on the decriminalization of sex work.

The total decriminalization of the sex trade is a complex issue, one that intelligent feminists can disagree on.

The total decriminalization of the sex trade is a complex issue, one that intelligent feminists can disagree on.

Dunham assured fans today that she is, indeed, still composing her own tweets, even if she isn’t directly engaging with followers as frequently as she might have in the past.

Not that it's anything to be so proud of, but I do still compose my own tweets :/

I still appreciate your time and love, even if I'm not checking my replies. Isn't this fascinating? How's your day? Cool!