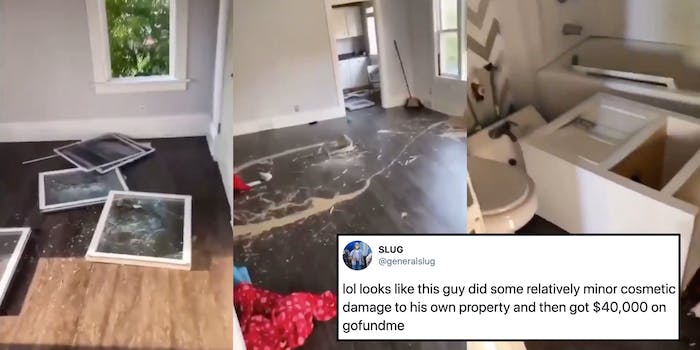 A landlord is claiming a tenant purposely destroyed his property in retaliation after being asked to move out, but after seeing the video, viewers are calling it a scam.

Allen White organized a GoFundMe to cover what he claims to be the cost of repairing the damage done to a property he owns in Racine, Wisconsin. According to his fundraising page, he rented out the space to a woman and her five children but ultimately had to kick the family out after complaints from neighbors and delayed rent payments.

When he went to survey the property after she left, he says he found it in total disarray.

Footage taken by White shows paint spilled all over floors, broken windows on the ground, and other debris scattered about the rooms.

“This what the f*ck y’all do to people?” he screams in the video, sounding close to tears. “I swear to God on my mama, b*tch, if I see you, I’m going to prison. I’ll shoot you dead in your motherf*cking face, b*tch.”

The five minutes White spent touring the property and expressing his anger may have backfired. Though his GoFundMe has raised over $40,000 at this point, people on Twitter with experience in construction, maintenance, and property management have been pointing out the alleged discrepancies in this particular landlord’s narrative.

One of the more compelling rebuttals comes from @Crazy_Procyon, who says that as a maintenance worker, she’s done repairs on multiple properties after people have been evicted, and this is not how renters go about destroying property in retaliation.

Others chimed in with other things they noticed in the video that made White’s story of debilitating damage done by angry tenants seem suspicious.

Frustrations with landlords have been running high this year, with so many people out of work due to the pandemic and yet still everyone is expected to pay rent so that landlords can turn a profit. Many have denounced the process—and landlords themselves—as parasitic, and are siding with the tenant regardless of what actually went down in this specific instance.

However, the tenant in question, Nicole Copasetic, has both denied White’s claims about unpaid rent and property destruction and came back with her own claims that White, who also goes by the name Timmy James, repeatedly broke into the property to threaten her and her children and cut off both the water and electricity while they lived there. She’s been sharing messages from White on her Facebook and started her own GoFundMe to try to bring a civil suit against him.