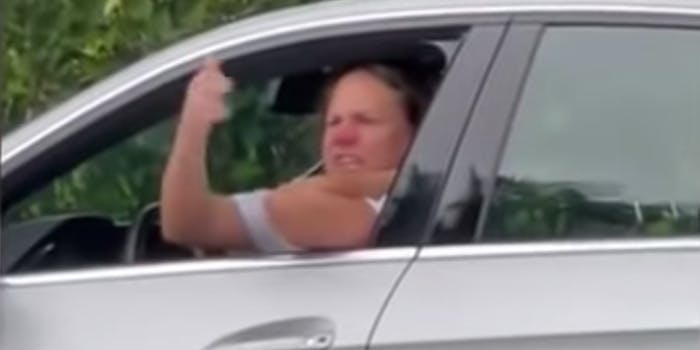 ‘Are those your mulatto kids?’: Karen filmed calling kids ‘half-breeds’ identified as a teacher (updated)

'Did you have sex with a Black guy? Your kids are half-breeds, look at them,' she says to the mom while sitting in her Mercedes Benz.

Update 11:47am CT Aug. 18: When reached for comment, the Collier County School District (CCPS) told the Daily Dot in a statement that it is “aware of the video, and the incident is currently under review.”

They identified the employee as Patricia Schmidt and said that she “will be on administrative leave and assigned to Human Resources until the conclusion of the investigation.”

Update 2:00pm CT Aug. 19: The Collier County School District revealed Schmidt no longer works for CCPS in a statement sent to the Daily Dot. “The destructive comments of Ms. Schmidt do not reflect the 7,000 talented, dedicated, and hardworking employees of Collier County Public Schools (CCPS). Accordingly, she is no longer employed by CCPS. The video and the corresponding CCPS review have already been sent to The Florida Department of Education Office of Professional Practices Services,” the statement read.

Initial story: A neighborhood in Florida has the unique privilege of boasting its own personal Karen.

She’s been dubbed “Kings Lake Karen” by her neighbors, many of whom say they have spotted the woman shouting insults at passerby. She has a tendency to target children, according to neighbors, despite the fact that she was recently identified as a teacher in nearby Collier County School District.

The woman was caught on camera Sunday as she screamed racist insults at a passing family. For several years now, neighbors reportedly say the Karen has taken it upon herself to “guard” a path that passes nearby her house, even from those who have full access to the area restricted to “Kings Lake residents only.” In the video, filmed by a passerby, Karen can be seen shouting insults from the drivers seat of a Mercedes Benz. She calls the woman filming “white trash,” insisting that she and her “half-breed” children “can’t afford to live in Kings Lake.”

“Are those your mulatto kids?” Karen can be heard shouting in the video. “Did you have sex with a Black guy? Your kids are half-breeds, look at them.” Neighbors say she has a tendency to target children with her unhinged rants, particularly children of color. Earlier this year, the bi-racial foster child of another neighbor was also allegedly targeted. The child reportedly suffers from PTSD, according to his mother, who noted that Karen “specifically targets kids.”

One neighbor noted that “she’s just appointed herself the bridge troll of that little stretch of property.”

“She wants to know who they are, where they live, and has no problems telling them where to go,” another neighbor, John Courtwright, said of people attempting to use the path, per Raw Story.

“If she’s terrorizing people in her car now, where’s it got to go before they do something,” nearby resident Douglas Rankin reportedly added. “Somebody’s going to get hurt.”

The neighborhood is just looking for a little peace, according to local station NBC 2’s reporting. They’ve taken their concerns to Collier County School District, which has placed the woman on administrative leave and is reviewing the most recent video.