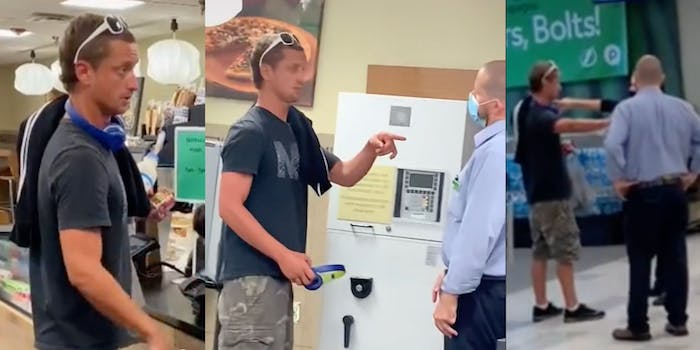 ‘I’ve never, ever, ever witnessed something like this’: Video shows white man kicked out of Starbucks inside grocery store after allegedly using N-word (updated)

A manager escorted the man out.

Update 2:27pm CT Aug. 18: A spokesperson for Starbucks reiterated to the Daily Dot via email that the manager “who escorted the man out of the supermarket is a Publix employee, not a Starbucks employee.” “Starbucks located inside grocery stores like this one at Publix are not company-owned. They are licensed and run by the individual grocers, so all employees are employees of the supermarket,” the spokesperson added.

Initial story: A series of viral TikTok videos show a white man being kicked out of a grocery store’s Starbucks after he allegedly called a Black barista the N-word in Tampa, Florida.

The woman recording the incident says in one of the videos that the man used the racist slur because the barista was tending to her and a little girl, who is Black and witnessed the incident.

The videos were uploaded to the account of a nail supply store that goes by @tropixoticbeauty on TikTok last week.

In the first video, the man says, “Fuck off! Do you hear me?” with his fingers raised at a barista behind the counter and plastic screen.

“He just called her a [N-word[ bitch,” the woman behind the camera says. “Bro, I’ve never, ever, ever witnessed something like this.”

The Black employee walks away from the man, as though escaping the situation. The man walks to the far end of the counter, swinging between calling the baristas “fucking bitch” and “ma’am.”

“He was over here calling this Black lady a [N-word] because they were helping us,” the TikToker said later in a follow-up video.

In the second video, which is at times blurry as the person filming moves the camera, the man is approached by two store managers.

One manager approaches him first, apparently trying to have a conversation. The conversation is mostly inaudible, but the customer curses at the manager at least twice. A female manager then approaches the two with her hand on her hips.

According to a caption that appears on the video, the female manager was not having it and is repeatedly points the man toward the door. “I’ll wait outside,” he says as he begins walking.

The female manager escorts the man out the door. He appears to verbally resist and defy her orders as he walks out, pointing his fingers at the first manager who’d approached him.

Both videos have collectively been viewed more than 4 million times.

The Daily Dot has reached out to the user behind the TikTok account and will update this report if they respond.