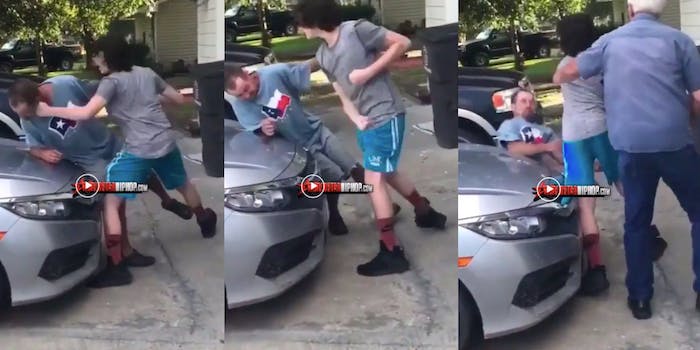 The 2019 video goes viral again amid a shifting landscape.

Early Friday morning, a video of a teenage boy knocking out his stepdad was uploaded to Reddit’s PublicFreakout forum. The 26-second clip, which originally was published on WorldstarHipHop in 2019, shows an altercation between the boy and his stepfather that escalated once the father referred to the boy’s Black friend—who is present at the scene—as the N-word.

The young boy took 10 hits at his stepfather before the man hit the ground. An older man tried to intervene, but it was too late. The final hit left the stepfather unconscious, on the ground.

With this moment of racial justice movements gaining widespread attention, several videos of people verbally dismantling unconscious biases and calling out racism have swept the internet. Other videos including violent reactions in response to racist behavior have also resurfaced. Just two weeks ago, a similar video of a young white man hitting another white man in the head with a skateboard for using the N-word, went viral on Twitter.

While resorting to physical assault can be dangerous for the both victim and the perpetrator, racism’s long history of violent and systemic oppression is equally as dangerous. As Americans being to reckon with this, these long-viral videos are seeing a dramatic online resurgence.