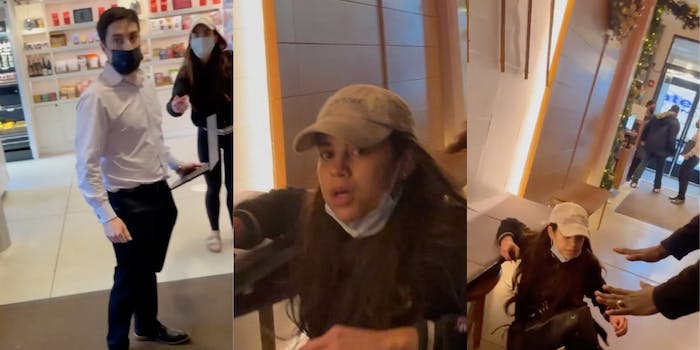 The woman reportedly found out moments later that she left it in an Uber. However, she didn't apologize.

A video on Instagram shows a woman at a Manhattan hotel accusing the Black son of a Grammy-winning musician Keyon Harrold of stealing her phone—that she reportedly left in an Uber. The manager sides with the woman, who wasn’t a current guest, rather than Harrold and his son, who were.

The now-viral video was posted by Harrold on Saturday. The St. Louis native was staying at the Arlo SoHo with his 14-year-old son. In the video, the woman, who has yet to be identified, tells the hotel manager that the 14-year-old stole her phone.

“This is my phone,” Harrold’s son says, to which Harrold intervenes: “You don’t have to explain nothing to her.”

“Take the case off. That’s mine. Give it back to me,” she demands. Harrold notes that more than one person can have an iPhone before telling her to “go use find my iPhone” rather than harass them.

“This person quote on quote ‘lost’ her iPhone, and apparently, my son magically acquired it, which merely ridiculous,” Harrold wrote on Instagram.

Harrold wrote that the woman wasn’t even a guest at the hotel at the time of the incident, as she checked out on Dec. 23. “Now watch as the manager advocates for the lady who is not even a hotel guest, insisting and attempting to use his managerial authority to force my son to show his phone to this random lady. He actually empowered her!!! He didn’t even consider the fact we were actually the guests! Now think about the trauma that my son now has to carry, only coming downstairs to have box day brunch with his dad,” he wrote.

In the video, the manager asks to see the “background” of the teen’s phone. “No! This is my son!” Harrold tells the manager.

“Show me the proof,” the woman keeps demanding.

The woman repeatedly lunges at Harrold throughout the video. Harrold wrote on Instagram that she “scratched me” and “tackled and grabbed him.” Harrold added that the incident went on for more than five minutes and that he was “protecting (his) son from this lunatic” the whole time.

Harrold wrote that the woman left her phone in an Uber, and it “was magically returned by an Uber driver a few minutes after this incident.”

He added that the woman and the hotel failed to apologize to him and his son.

“No apology from her after this traumatic situation to my son, not me. No apologies from the establishment. This shit happens so often. It needs to stop!!! If anyone recognizes this person, please tag or DM,” he wrote.

Harrold said in the caption of the video: “I hate I have to post this!!! I am furious!!! We see this crap happening all the time, but it hits different when it hits home!!! I typically try to keep things positive, but nothing about this video is positive.”

People online are expressing support for Harrold and his son and are slamming both the woman and the hotel. Many are pointing out that Black boys are often depicted as criminals for merely being in the wrong place, at the wrong time, when whiteness and its privilege is at work.

“Black people don’t have to show white people their phones, just to prove it’s not theirs,” one noted.

“This is absolutely (abhorrent) @ArloHotels. Black guests are automatically thieves unless they prove their innocence while being assaulted???? I’m so sorry this happened to you @keyonharrold. Will keep frequent tabs on this story to see Arlo Hotels amend this,” Nayamka Roberts-Smith said.

The Daily Dot received a statement from Arlo Hotels:

“We’re deeply disheartened about the recent incident of baseless accusation, prejudice, and assault against an innocent guest of Arlo hotel. In investigating the incident further, we’ve learned that the manager on duty promptly called the police regarding the woman’s conduct and that hotel security intervened to prevent further violence; still, more could have been done to de-escalate the dispute. No Arlo guest – or any person – should be subject to this kind of behavior.”

“We want to apologize to Mr. Harrold and his son for this inexcusable experience, and have reached out to them directly to express our sincere regret and to offer help in dealing with this traumatic event. We are committed to making sure this never happens again at any of our hotels.”