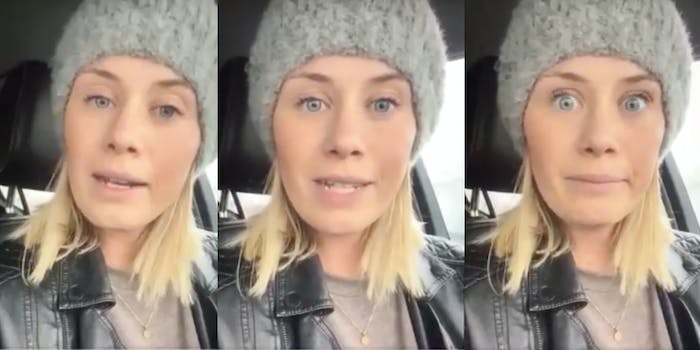 'This is hard for me. I'm not ready to share this story,' she said at the time.

Katie Sorensen, a white Instagram influencer known for her parenting content, was reportedly arrested and charged with giving false information to police after accusing a Latino couple of attempting to kidnap her children in December.

In December of 2020, Sorensen went viral after making the accusation in two videos posted to her Instagram account, where they saw nearly 5 million views, according to the New York Post. The California mother has reportedly since privatized her account @motherhoodessentials_, formerly known as @motherhoodessentials.

She accused Sadie Vega-Martinez and Eddie Martinez, a Latino couple, of trying to kidnap her children at a Michaels in Northern California.

“This is hard for me. I’m not ready to share this story, but I know it’s important. I would rather be uncomfortable, and awkward, and get the message out sooner than wait until I feel composed because I don’t know if I’ll ever be composed talking about this,” she started her story.

She called her children “targets of attempted kidnap.”

She said the couple followed her around the craft store, made comments about her children, and that, at one point, the man lunged at her double stroller, according to BuzzFeed News.

After investigating the incident, days after Sorensen made the accusations, police in Petaluma cleared the couple of any wrongdoing. In fact, police, according to BuzzFeed News, found evidence that supported the couple’s version of events rather than evidence of a crime.

Sorensen was charged with two misdemeanors, the Sonoma County District Attorney’s Office confirmed with the Daily Dot. The charges against Sorensen were announced on Thursday.

After hearing Sorensen is facing charges, the couple—who accused Sorensen of racially profiling them in the immediate aftermath of her accusations—told the Petaluma Argus-Courier they were “very happy.” “It gives everyone a little bit of (hope). Things like this do happen, and we wondered for a while if she would ever face charges,” Sadie Vega-Martinez told the outlet.

Sorensen’s next court date is slated for May 13, the district attorney’s office told the Daily Dot.

The Daily Dot has reached out to the Petaluma Police Department.