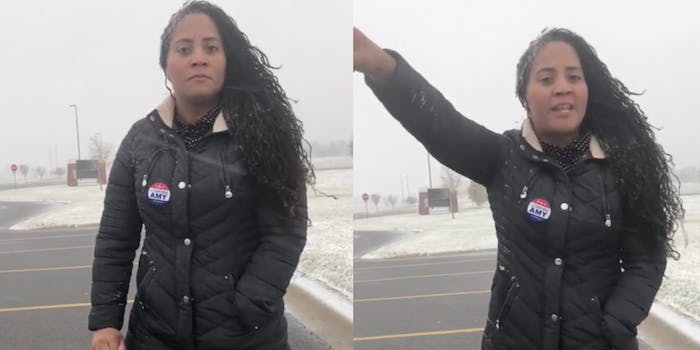 As the pandemic continues, one parent doesn't seem to be doing her part to slow the spread.

A video has surfaced showing a mom “Karen” proudly announcing that she has sent her daughter to school without a mask, where she claims the ninth-grader is the only maskless student.

The video was shared on Reddit over the weekend, garnering thousands of views. It starts with her announcing that she’s standing outside Marshall High School. The Daily Dot was not able to independently verify either the school or the location. In the video, it’s snowing. In the last three days, it snowed in four states in the U.S. There is a Marshall High School in two of those states: Washington and California.

The mother says she was waiting outside the school to see if her daughter “will get kicked out.”

She goes on to say that those are who are wearing masks are “blindly following orders” and not questioning them.

“What are we teaching our children?” she says. “You think this is about keeping us safe? Since when has America ever done that for us? Especially you Black people, wake up!”

It’s not clear if the woman herself is Black, and she did not identify her ethnicity in the video.

“My daughter is the only one in that high school, the only one there without a mask on,” she says later in the video, “and everyone else is just blindly following.”

The Reddit user who posted the video did not respond to the Daily Dot’s request for further information.

People on the thread were quick to point out the “Amy” pin she’s wearing in the video, likely in relation to Supreme Court nominee Amy Coney Barrett.

“Is it ironic that she’s wearing an “Amy” pin which signifies her support of Amy Coney Barrett for Supreme Court?” wrote the user in the Reddit thread. “Perhaps this woman would like to join that cult Coney Barrett is a member of, People of Praise?”

The video surfaced as there’s a renewed spike in COVID-19 cases across the country, with the last few days recording the highest average number of cases since the pandemic began. And this was not lost on some of the people who watched the video.

“This is the reason the us is far behind every other country,” wrote one user.

“You think there were Karens back during the Plague? Maybe that’s why it was so prevalent,” wrote another.

And it generated some tone-deaf comments that missed the nuance of criticizing the mother’s ignorance without having to wish death upon a child.