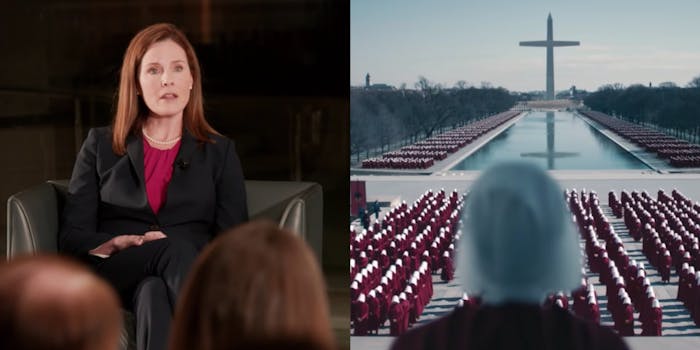 No, Amy Coney Barrett and ‘The Handmaid’s Tale’ are not connected

Here's why people think they are.

Amy Coney Barrett has emerged as the frontrunner to fill the Supreme Court seat left vacant by late Justice Ruth Bader Ginsburg, and with that, Barrett’s religious group has come under more intense scrutiny.

President Donald Trump is reportedly expected to officially announce Barrett as his nominee for the Supreme Court Saturday afternoon. Barrett, a devout Catholic, is part of a religious group called the People of Praise.

People online began claiming the People of Praise inspired The Handmaid’s Tale, Margaret Atwood’s 1985 dystopian novel that has since been turned into an award-winning Hulu show about women, referred to as “handmaids,” who are considered property and forced into sexual slavery tasked with repopulating the world. The Handmaid’s Tale even began to trend on Twitter Friday night after it was reported Trump is intending to nominate Barrett to the Supreme Court, with some going as far as to claim Barrett herself inspired Aunt Lydia, the handmaids’ abusive handler. The rumor was further exacerbated by multiple news reports that falsely indicated the two were connected, according to Vox, which thoroughly fact-checked and debunked the claim.

While there isn’t a connection, there are multiple coincidences that led people to believe there is. According to Vox, the New York Times reported in 2017 that People of Praise members look to both female and male personal advisers for guidance on “whom to date or marry, where to live, whether to take a job or buy a home, and how to raise children.” While the name was changed to “leaders” in 2018, the female advisers were once referred to as “handmaids.”

“Recognizing that the meaning of this term has shifted dramatically in our culture in recent years, we no longer use the term handmaid,” the group said in 2018, according to Reuters.

In 1987, Atwood described her inspiration—without naming it—as an “a Catholic charismatic spinoff sect, which calls the women handmaids,” which uncannily resembles the description for the People of Praise. The quote recently resurfaced after Barrett and the group became a matter of contention. Hoping to gain some clarity, Politico recently asked Atwood which group she was describing in 1987, and she said she wasn’t sure and that she can’t access her archives due to coronavirus restrictions to check. Vox notes, however, she has in the past cited the People of Hope, another Catholic group that refers to wives in it as handmaids, as her inspiration.

And the outlets that incorrectly reported on the connections later issued corrections.

However, another aspect that made the rumor so believable is the values Barrett and the People of Praise hold. The People of Praise is said to abide by a “highly authoritarian” structure, wherein, according to Vox, husbands act as heads of families and hold authority over their wives.

Coral Anika Theill, a former member of the People of Praise has reportedly previously called the group a “cult” and likened it to The Handmaid’s Tale. Theill, who is protesting Barrett’s nomination, said women in the group are obedient to men and that independent thinkers are “humiliated, interrogated, shamed and shunned.”

Barrett’s religion, along with the group, is now one at the center of the debate on whether it will affect her judicial obligations should the Republican-led Senate controversially confirm her before Election Day.