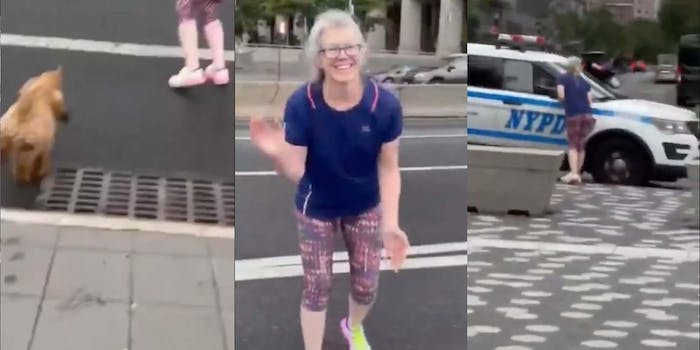 ‘They don’t put a leash on in your country?’: ‘Karen’ tries to lure unleashed dog onto a highway

“Have you never heard of a leash in the city?” says a white woman dubbed a “Karen” who was captured on video by an Asian man. The woman also allegedly told him to “go back to his own country” before the camera came on.

“Which country should I go back to, Karen?” the man filming says.

The woman attempts to get his dog to run into a New York City highway multiple times. Redditor @Tefunka posted the video on Sunday.

“What kind of problem do you have, lady?” says a passerby who criticizes the woman for making racist comments and trying to get the dog to go into the busy street.

“They don’t put a leash on in your country?” the woman asks before unsuccessfully getting the dog to follow her into the street. According to New York City’s Department of Sanitation, dogs are not allowed in public places unleashed.

The video ends with the woman talking to a police officer through his car window.

“There’s a way to tell someone to put a leash on their dog,” states the top Reddit comment from @SabeelRehman. “This isn’t it.”

The incident captured on video is reminiscent of a “Karen” who was called out for not having her dog on a leash. Amy Cooper falsely claimed that Christian Cooper, a Black man, was “threatening” her life when he asked her to put her dog on a leash.

The New York Police Department did not immediately respond to The Daily Dot’s request for comment.