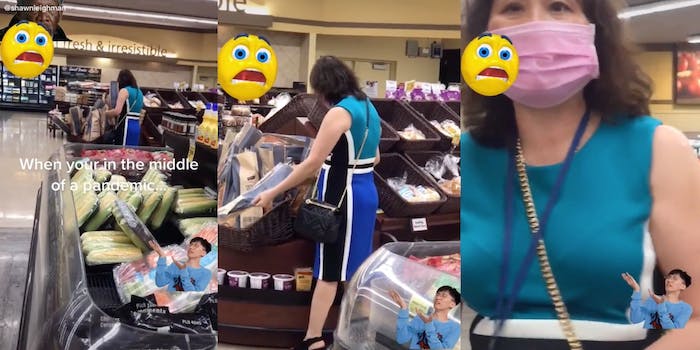 ‘I’ll never buy that kind of bread again‘: Karen touches all of the exposed bread at a grocery store, gets confronted by a bystander

A viral video of a woman reaching inside open bags of bread and touching multiple loaves before choosing one has some viewers swearing off unsealed loaves of bread at the grocery store.

Filmed in a supermarket, a woman in a blue dress and pink mask is seen reaching into the bags of bread baked at the store, which come in unsealed packages. She touches many of the loaves and even pulls them out of the packages to further inspect them. When she selects the loaf she wants, the woman filming the video stops her and asks her if she is going to buy the rest of the loaves that she touched.

“You gonna buy the rest of them that you touched? You touched the whole thing. You touched all of them. You pulled them out of the bag. Are you going to buy them all?” the filmer says to her.

“I’m sorry,” the woman who was touching the bread replies before walking away.

Viewers were likewise disturbed by what they saw, with some saying they would never purchase that type of bread again if it were unsealed.

“They’re practically all the same but she’s looking for the perfect one and I won’t buy an open [package] again,” one commenter wrote.

Others remarked that they were glad the woman filming said something.

“Wasn’t expecting the confrontation at the end!” one commenter wrote. “GOOD JOB, she needed to be told, I could imagine, she touching everything there.”

It’s not clear which grocery chain this happened in, but other commenters wrote that the store needed to seal the bags. Many grocery stores, however, offer unsealed bags of bread in the bakery section.

The whole situation—pandemic or no pandemic—grossed people out. Some wrote that not touching the bread is something most people already know going into grocery stores.

“Pandemic or not!” another commenter wrote. “DON’T TOUCH THE DAMN BREAD!!! This is a normal habit that everyone should know ever since they were born.

It’s unclear whether the woman filming informed any management at the store. The Daily Dot has reached out to @Shawnleighman for comment.