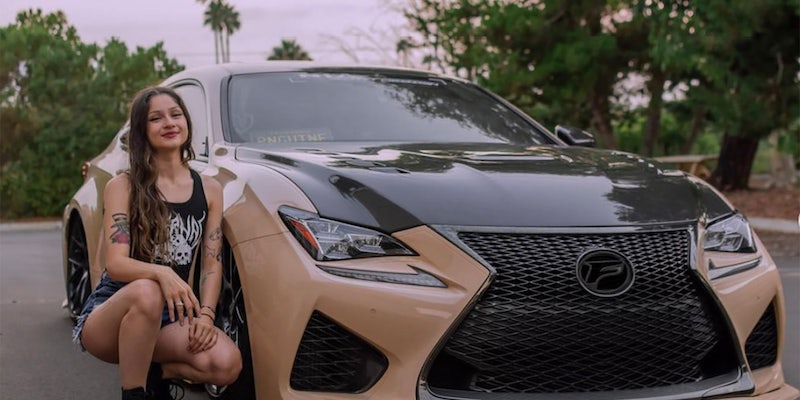 ‘The noise of this car drives me nuts’: Karen questions if TikToker’s car is ‘street legal’ in viral video

The Karen reportedly called the cops on the TikToker after the encounter.

A TikToker revealed a conversation she had with a Karen regarding her car, with the Karen questioning whether the TikToker could legally operate it because it’s loud.

The video, which has drawn more than 3.3 million views in two days, comes from the @breercf account. While the video just shows the conversation the TikToker had from inside her car, the creator’s also shared photos of her with her car on Instagram.

She prefaced the video with a note stating, “My car is only cosmetics with an exhaust,” and “Cops have come before and said I’m doing nothing wrong.”

The video captures an exchange the car owner had with the Karen. Her on-screen caption, visible throughout the entirety of the video, reads, “Some Karen started banging on my window & yelling at me for starting my car.” It then notes, “She calmed down a little when I started to record the interaction.”

The video starts with the creator saying to the Karen, “I don’t drive this car every day.”

“Okay, there’s a lot of other modified cars in this community,” the TikToker retorted, and then, as the Karen tried to interject, she pointed out, “I pay for this parking spot.”

Then, the Karen tries to express that she thinks the car is too loud. “I’m complaining because the noise of this car drives me nuts.”

As the TikToker points out, “It’s a V8. It’s not modified. It’s street legal.”

The Karen responds, “I don’t know what that means, but I just can’t stand this.”

“There’s nothing illegal on this car,” the TikToker asserts.

“The muffler? Whatever it is?” the Karen queries.

“There’s still a muffler on this car,” the TikToker explains.

“Why does it make so much noise?” the Karen persists.

“Because,” the TikToker patiently asserts, “it’s a V8 with almost 500 horsepower.”

The Karen then announces that she’s off to complain about it, leading the TikToker to cheerily say, “Great!”

As the Karen leaves, the TikToker does allow herself to whisper, “Bitch,” to let her feelings on the exchange be known.

The creator added an update in the comments section: The cops were called, said she wasn’t doing anything wrong, and the creator’s apartment leasing office opened a file against the Karen as she’d been harassing other people with loud cars in the community. “I haven’t driven my car since the vid was taken,” she added, “but will continue to drive it when I want.”

Commenters were amazed at the chutzpah of the Karen. One wryly observed, “Fun tip: If you start slowly pressing the gas pedal, her voice will gradually disappear.”