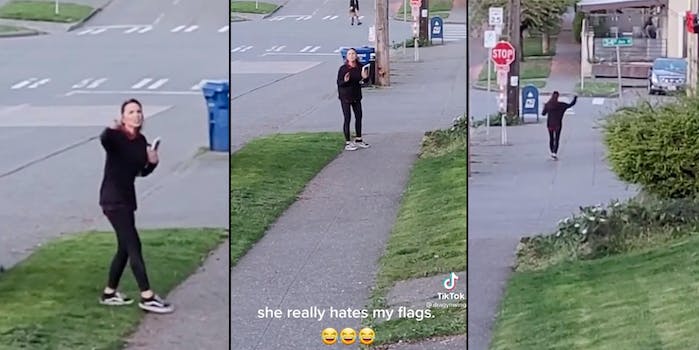 Video: ‘Karen’ freaks out over flags on woman’s fence in Seattle

The woman did not take kindly to the TikToker's political flags.

A Karen walking down in a street in Seattle was angered by a woman who had four flags on display, and her very Karen reaction is being savored by fans of public freakouts.

The video, which appears to be taken in Seattle’s Magnolia neighborhood, was shared on a now-defunct TikTok account by a user using the @dragynwing handle but lives on via Reddit’s r/PublicFreakout subreddit where it went viral Monday.

The video captures the Karen as she’s down the street from the flags that offended her, yelling “Outta here” at the person filming, who is excitedly yelling “Wow!” repeatedly at the Karen.

It’s then clear, even though there’s some cross-talk between the parties, that the Karen labels the person filming as a “fucking instigating [C-word].”

The person filming then yells back, “You’re calling me an instigator, but you walked past my house!”

This is all taking place with a graphic overlay on the TikTok video that reads, “She really hates my flags” with three joy emoji underneath.

The video continues with the Karen continuing to yell as she backs away from the woman filming, who is shouting in return, “You are a peach!” and “You have a blessed day!”

The Karen continues to yell, and at one point gestures with a middle finger, with the TikToker egging her on. At one point, the Karen starts back up the hill, and the TikToker says, “Are you gonna come to my house?”

Though the video ends there, there’s a second part on the Twitter account that @dragynwing uses. It’s accompanied by explanatory text reading, “I was hanging flags on my property when this lady walked past me and went off the deep end. I had my back to the street and didn’t see her until she started by telling me that my flags were bullshit.”

About 20 seconds into the video shared on Twitter, after the Karen walks away, and the person taking the video remarks, “Bless her heart! I ain’t even done getting my stuff up yet,” the camera turns around to reveal the flags.

Two expressed anti-gun violence sentiments, with one simply reading, “End Gun Violence” and the other displaying the logo of anti-gun violence organization Moms Demand Action. There was also a Black Power flag integrating rainbow colors, as well as the Daniel Quasar-rebooted Pride flag.

“I’m just over here hanging signs,” she said, panning over the display of flags on her fence. “I wonder which one ticked her off.”

“All right,” she said, panning back to where the Karen had ventured off to. “Seattle, Washington! We’ve got ours here, too.”