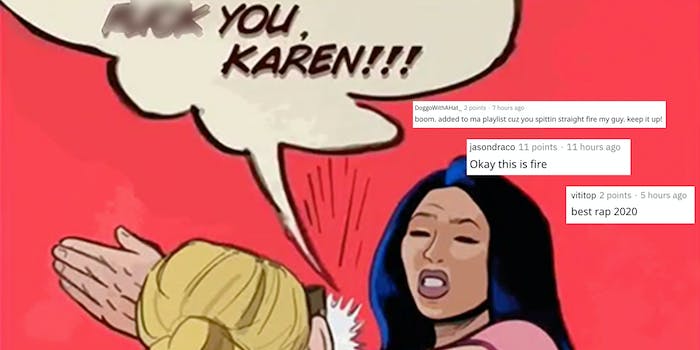 ‘F*ck You, Karen’ is the anti-Karen rap anthem that 2020 demanded

Las Vegas rapper Hassan Hamilton‘s Karen diss track is the satirical commentary on rampant Karen incidents that you didn’t know you needed to hear. The track entitled “Fuck You, Karen” appears on Hamilton’s latest EP Getting 2 Old 4 This, and was shared this week on the r/FuckYouKaren subreddit, receiving big-ups from listeners who pinned it as “fire” and the “best rap of 2020.”

In the track itself, Hamilton is heard dissecting the nature of the Karen phenomenon, calling the stereotypical Karen out for a sense of entitlement and using white supremacy for selfish benefit when things don’t go their way. He indicts them with comedic lines about “putting raisins in your potato salad” and driving “soccer mom vans,” among other commonalities like “always wanting to speak to the manager.”

In an August interview with Las Vegas Weekly, Hamilton said that his project was created in quarantine, nothing that “something has to be dope in 2020.”

“I wanted to do that because it’s a really serious situation. People could literally get killed or arrested just because you felt a certain way,” he told LV Weekly.

He continued, explaining how the recent police killings of Breonna Taylor, George Floyd, and Ahmaud Arbery, as well as countless others, shine a light on the realities of existing while Black in America, underscoring the harmful nature of Karen incidents.

“Just let people be who they are. If you don’t like people, leave them alone. You ain’t gotta attack anybody. I know it sounds cliché, but if you ain’t got nothin’ nice to say, don’t say it,” Hamilton said.