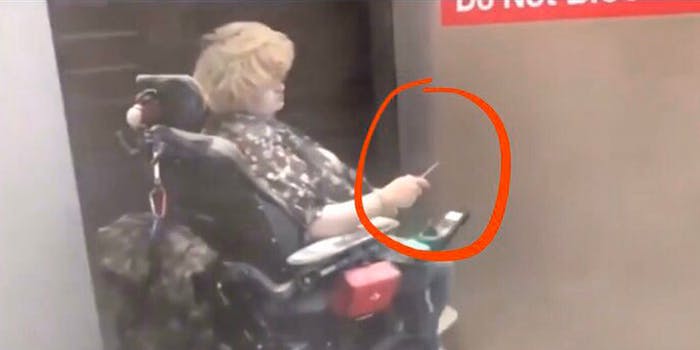 It was the second night of protests in Minnesota over the death of George Floyd.

Protesters in Minneapolis gathered over the last two nights to protest the death of George Floyd, the unarmed Black man who died after a police officer knelt on his neck for more than seven minutes on Monday.

The protests began peacefully but became destructive by the second night, culminating in the looting of a local Target. One woman attempted to block protesters from leaving while driving around the store in a motorized wheelchair—but there was more to the confrontation than initially met the eye.

The woman, whom protesters referred to as “Jennifer,” could be seen driving through the Target with a knife in her hand and allegedly tried to stab several protesters. One protester sprayed her with a fire extinguisher as others yelled, “Jennifer, get the f*ck out of here!” As she drove her wheelchair straight into a wall, another man asked, “Jennifer, is that enough?”

Other videos show protesters attacking Jennifer inside and outside the store. At one point, a woman tries to grab Jennifer’s purse; when she swats her hand away, another woman comes up behind her and punches her in the head repeatedly.

Right-wing media personality Andy Ngo tweeted video of Jennifer’s showdown with protesters, as he exhaustively documented the protests last night. “At the Target in Minneapolis that was being looted tonight during the BLM riot, a woman in a wheelchair was attacked,” he wrote.

Somebody caught up with Jennifer on the street after she left the Target, where she documented her wounds.

“They punched me in my mouth, my head, I got punched in the head several times,” she said. “I got grabbed from behind. People grabbed my wheelchair. They stole my keys. They stole everything they could off of me. I got maced in the face. I got covered with fire extinguisher stuff. I’ve already seen the EMTs, and they told me to go home.”

Opinions on Jennifer were divided on social media. Some people argued that protesters were in the right to retaliate if she tried to stab them. Others insisted that it was barbaric and counterproductive to attack a woman who is disabled.

Here’s the thing, though: Jennifer can apparently walk.

Another video uploaded by Twitter user @debostic appears to show Jennifer walking toward a group of people on the sidewalk before returning to her wheelchair.

Several Twitter users chalked it up to another example of white people refusing to take responsibility for their actions and blaming Black people instead.

“The fact that this Jennifer later on puts the blame on them and says they were hurting her WHEN SHE WAS THE ONE WHO HAD A KNIFE AND WAS STABBING PEOPLE,” @lonelyalexaa tweeted. “THIS IS ANOTHER EXAMPLE OF WHITE FOLKS PUTTING THE BLAME ON THEM.”

Conflicting reports regarding Jennifer’s age have also surfaced. While some people referred to her as “elderly,” others said that she is only 30. (The Daily Dot could not independently verify her age.)

The fury and confusion surrounding the incident caused “Jennifer,” “She’s 30,” and “She can walk” to trend on Twitter on Wednesday morning. Suffice to say, the “Jennifer” discourse is far from over.