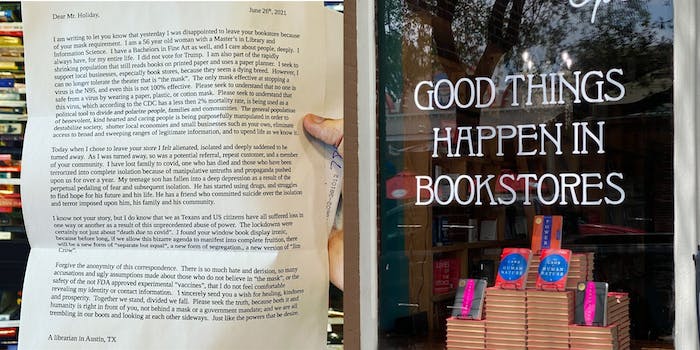 The owner explained his rationale for upholding the mask policy, saying his county has low vaccination rates.

A small Texas bookstore still requiring masks received a verbose condemnation of their decision from an anonymous would-be customer intent on letting them know just how much they are alienating anti-maskers.

Ryan Holiday, the owner of The Painted Porch in Bastrop, Texas, shared an image of the “fun letter” to Twitter, dated June 26th and signed only “A librarian in Austin, TX.”

The woman who sent it started off by letting him know that she has a “Master’s in Library and Information Science,” “a Bachelors in Fine Art,” and that she “[cares] about people, deeply.”

“I did not vote for Trump,” she added. “However, I can no longer tolerate the theater that is ‘the mask’. The only mask effective at stopping a virus is the N95, and even this is not 100% effective.”

She went on to claim that COVID, which has caused nearly four million deaths worldwide in the past year and a half, is nothing more than a “political tool to divide and polarize people, families and communities.”

“The general population of benevolent, kind hearted and caring people is being purposely manipulated in order to destabilize society, shutter local economies and small businesses such as your own, eliminate access to broad and sweeping ranges of legitimate information, and to upend life as we know it,” she wrote.

The letter was allegedly in response to the woman being turned away from The Painted Porch for not wearing a mask, although a few inconsistencies in the letter regarding when it happened (the use of both “today” and “yesterday”) and whether she was turned away or “chose to leave” have some questioning that.

Since posting the letter on Twitter, Holiday has fielded further complaints from Texans that agree with the anonymous woman.

“I see no lies here,” one person replied. “God bless this lady.”

Another claimed that The Painted Porch and “the woke Apple store are the last holdouts of that kind of thinking,” an inaccurate claim.

Holiday also explained his rationale for upholding the mask policy, saying the county his store is located in is less than 40 percent vaccinated and he has young children who presumably cannot get the vaccine.

Redditors were more supportive of Holiday’s decision to err on the side of caution for the time being—and critical of the alleged librarian’s complaint.

For his part, Holiday doesn’t seem shaken or swayed by the opposition to masking.

“Not even a question for me of what I’d prefer,” he replied to one anti-masker on Twitter, “keeping my kids and my employees safe or losing (the worst kind of) customers in a county that is barely 40% vaccinated.”