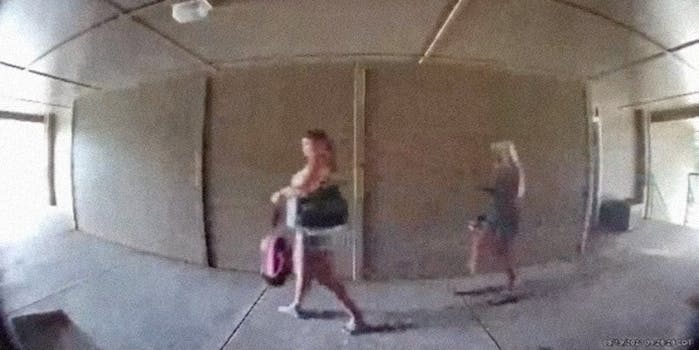 The TikToker notes her white neighbor 'had the nerve to say this sh*t in a hallway full of Black people.'

A viral TikTok video shows a woman saying the N-word as she walks by a Black resident’s apartment unit.

The woman was caught uttering the racist slur on on TikTok user Nyjiah’s (@therealnyjiah) Ring camera. Nyjiah posted the Ring camera footage to TikTok, where it’s been viewed over 360,000 times.

Nyjiah captioned the video: “Taking everything in me not to knock# on that door y’all #karen #blm #JifRapChallenge #EatFreshRefresh #fypシ #rasist.”

Nyjiah notes in the text overlay of the video that the woman, her white neighbor who is unidentifiable in the grainy video, “had the nerve to say this shit in a hallways full of black people with ring cameras.” The woman, dubbed a Karen by the TikToker, was apparently “mad” that they have a Ring camera installed.

“Y’all want a story time on why she so pressed about the cameras,” Nyjiah questions in the comments section of the video.

In the storytime video, Nyjiah says, “Me and my girl moved into the apartments, and we had our Ring camera up. So pnce we put our Ring camera up … like two weeks afterwards, we got a letter, saying, ‘Hey can we remove our camera?'”

The letter, she says, claimed neighbors were making privacy complaints. She says they realized the neighbor across from them was the likely culprit, as the camera primarily faced their door.

She says the woman was apparently “still pressed” after they moved the camera. So they decided to look at the Ring footage, and Nyjiah says they saw “different men coming in and out” of the apartment unit.

“We came to the conclusion that maybe she’s a sex worker, and that’s why she’s so pressed about having the cameras around,” she says. “But me and my girl, we’re women. We don’t give a f*ck; it’s 2021. Power to the women. If that’s how you’re paying your bills, sis, who are we to judge or to say anything?”

Nyjiah says that then other neighbors, who are also Black, also installed Ring cameras.

“That’s where the whole anger … happened this morning, where she and her homegirl, going to the pool, decided to yell out [the N-word],” Nyjiah says.

The Daily Dot has reached out to Nyjiah for comment.