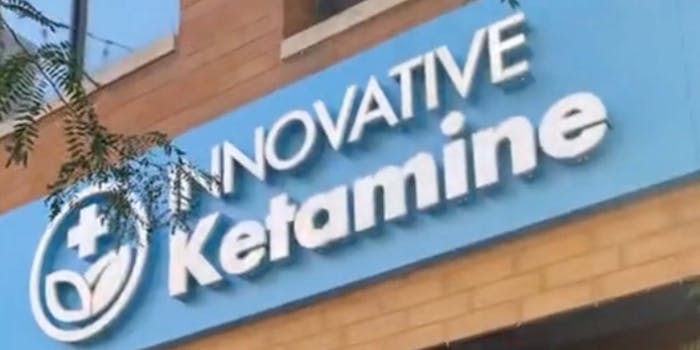 ‘I’ve got friends in prison for that sh*t’: TikToker films ketamine clinic, sparks debate on gentrification and double standards

'America: Where it's illegal until it's profitable.'

In a TikTok posted on Saturday, @justrantingtheblues films a Ketamine clinic in Chicago and calls it “the most colonizer thing” he’s seen “in a long time.”

“What the hell? I’ve got friends in prison for that shit,” he says.

In a follow-up video, @justrantingtheblues shows the clinic again with the text “America: Where it’s illegal until it’s profitable.”

The Food and Drug Administration approved the use of ketamine in small doses for medical sedation and anesthesia in 2019.

However, “possessing, selling, manufacturing, or transporting drugs (even legal ones) can lead to serious legal consequences,” according to the American Addiction Centers. Consequences can include jail time, to @justrantingtheblues’s point.

And @justrantingtheblues hasn’t stopped poking fun at Innovative Ketamine. In another TikTok, he wrote that he couldn’t wait to see what the clinic would give out for Halloween.

“It’s only for rich people because insurance doesn’t cover it yet,” commented @industrialfern on @justrantingtheblues’s initial TikTok. Innovative Ketamine states that “since Ketamine is only approved for anesthesia, insurance will not cover treatment for mood disorders or chronic pain,” on its website.

“What they did with [weed] is happening with ket now?!?” commented @reg.ex, referring to systemic convictions against Black people for marijuana charges.

Other commenters sang ketamine’s praises for medical usage, regardless.

“It’s an antidepressant and it’s amazing,” commented @_.cecelia. “It’s not used to get high.”

The Daily Dot has reached out to @justrantingtheblues and Innovative Ketamine.