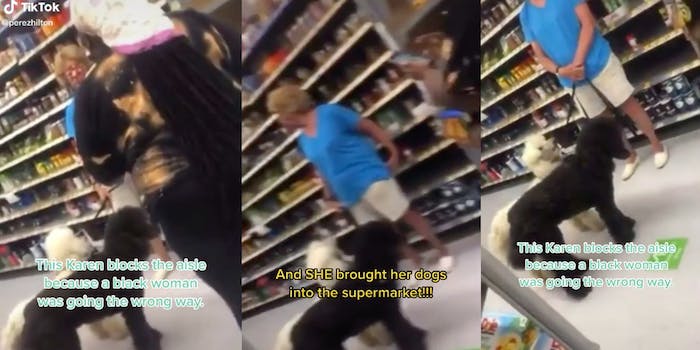 Perez Hilton highlighted the video on his TikTok channel.

The initial exchange between the two women was not recorded, but the video begins with the woman being blocked asking Karen to move out of the way.

“You’re in my way. I need to get seasoning,” the woman says.

Karen, who is in the store with two dogs, indicates refusal by nodding her head. It’s unclear what she says in response.

The woman recording asks Karen, “You won’t let her get seasoning?”

Karen then shrugs at the women, seemingly refusing to budge.

The woman being blocked by Karen begins to ask others to get a manager to intervene since Karen refused to move after multiple requests. “Can you call a manager, please?” she asks someone off-camera.

Karen then claims the woman was going down the aisle the wrong way.

Some chains instituted one-way shopping aisles as a coronavirus safety measure. And, on the floor in the video is an arrow pointing in the same direction the Black woman seems to be going. She is presumably going down the aisle the correct way, while Karen is in the wrong.

People sounded off in the comments, pointing that out.

“But she was going the right way, and why are those dogs there?????” one commenter questioned.

“I’m lost. The green arrow is pointing towards the way the lady who wants seasoning is going so how is she going the wrong way?” another wrote.

The women have yet to be identified, and it is unclear where the incident took place.