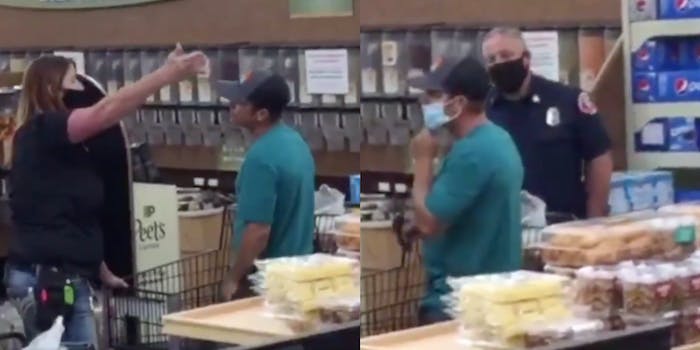 He was eventually booted from the store.

A man at a Smart & Final threw a tantrum when a female employee asked him to put on a face mask. He only put one on after a male security guard began approaching him and was eventually booted from the store.

A video of the incident, which was filmed by a bystander, has gone viral on both Twitter and Reddit, with many pointing out how differently he treats the two employees.

In the video, the female employee tells the man he needs to leave if he refuses to comply with the store’s mask policy, which was rolled out in April, according to Towleroad.

“Get away from me,” the man screams at her.

The two struggle over his shopping cart as she points to the door, telling him, “You need to leave right now.”

Then a security guard approaches them, and the man whips out his mask and puts it on.

“There you go. Thank you,” the woman says as she walks away, letting the man continue to do his shopping.

As soon as the man leaves the view of the employees, he rips his mask off.

In what appears to be a second confrontation, the employee once again is holding onto the man’s shopping cart, asking him to leave.

He then gets in the employee’s face and screams much louder.

The employee tells him to “back up,” but he refuses, telling her, “No, you need to back up!”

The security guard reemerges, and the man ceases his shrieking.

“Outside now,” the security guard says, pointing to the door. The man is then escorted out of the building.

It’s unclear which Smart & Final location the incident occurred at, but Towleroad notes the chain has stores in California, Nevada, and Arizona.