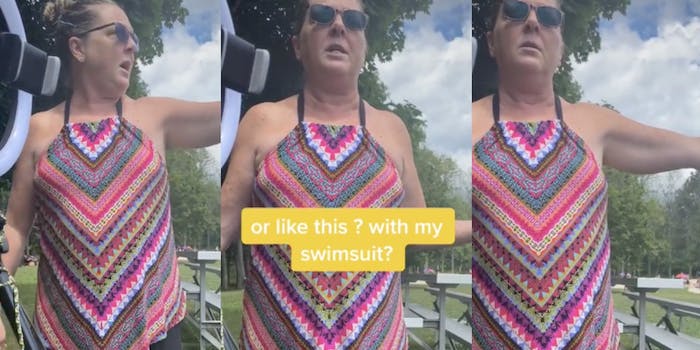 The mother said the woman needed to cover up because her sons were staring.

A vial video shows a woman coming up to a TikToker and telling her to put on some shorts because her sons were “staring at her a**.”

The TikToker, Aurea Miranda, was filming dance videos in a bikini when the woman approached her. She posted the interaction on Instagram and TikTok, where it went viral.

“You see that group of boys over there? Those are my boys,” the mother says in the video. “They’re staring at your a**, which is hanging out in the middle of a public place.”

At this point, Miranda stays quiet. The mother then asks the TikToker if she needs some shorts. Miranda asks what the mother means by that.

“I mean get your a** covered. That’s what I mean,” the mother says

Then Miranda asks if there’s a rule that details that she’s not able to wear a bikini at the public beach.

“Yeah, there is. It’s called nudity. You can’t be nude at a beach. This is a public place,” the mother shoots back.

Miranda says “alright” and that she’ll ask the workers about her bikini. The mother then walks away from the TikToker, who has since posted pictures and videos of herself to show what she looked like when the mother approached.

The bikini pictures have prompted some social media users to debate the size of the bathing suit and whether or not her clothes were appropriate.

But the vast majority of comments on the TikTok are in support of Miranda.

Those commenters quickly dubbed the mother “Karen.” Social media users give white women this name when they act privileged or racist. TikTok users commented saying that the mother should teach her boys to respect women instead of going on a tirade against Miranda.