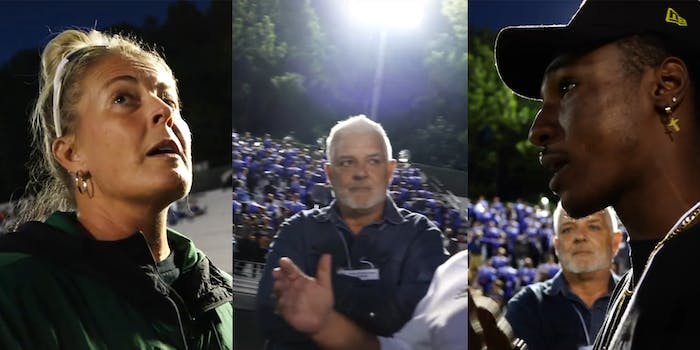 ‘Tell me how what you’re doing benefits our schools’: ‘Karen’ high school director says TikToker can’t be on her field, sparking debate

A viral TikTok video shows a “Karen” athletic director kicking former college football kicker and TikToker @deestroying off “her field” because he and crew had worked around her.

De La Haye was at a recent Collins Hill game, with field passes for himself and his crew; however, according to the video, it appears he did not make his request through the school’s athletic director, who has something to say. It is evident she has no awareness of who he is.

The TikTok video caption reads: “Guys, Karen wants to know how my videos benefit her program.. can y’all let her know in the comments please?”

“You guys aren’t welcome here on my field; y’all can film from the stands,” says the AD, explaining that it’s “my facility.” Then she asks, “Tell me how what you’re doing benefits our schools.”

His TikTok of the confrontation has received more than 6 million views since being posted this month.

“There have been guys who get scholarship offers from our videos,” he tells her. “A lot of guys are grateful for the publicity we bring to the program.”

She interrupts him: “See, here’s the problem: You got around me to get down here because you knew I wasn’t gonna let you down here, or you would’ve asked me for passes.”

But they tell her that they went through an unspecified football coach. She makes a face of immediate disgust.

The comments section is rich with comedy on the matter.

One person wrote that “She mad for no reason smh.” Another wrote, “It’s her facility; she built that field with her bare hands.”

The unfortunate exchange was the lede in De La Haye’s ultimately positive, school-boosting video that featured Hunter having himself a day.

In the long YouTube video, there’s more intel regarding the AD. Even a police officer was pretty clear that she did not want anyone on the sideline without her direct permission.

Comments went a little heavier in the YouTube video. One commenter wrote, “Karen said, ‘how does that help out my school.’ So she’s worried about what helps her out and not the benefit and positivity to the players.”

Toward the end of the video, there’s a peace offering of a flower for her from De La Haye as he stood in a crowd of students, and an understanding seems to be found.

The Daily Dot has reached out to De La Haye and the Collins Hill athletic director.