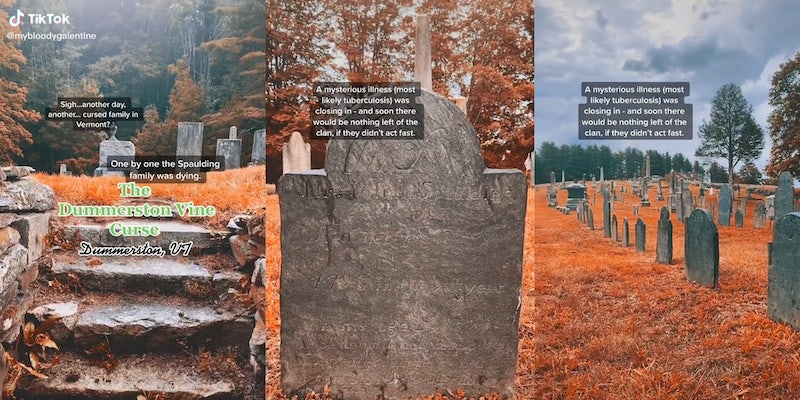 From the funny to the scary, these videos will get you in the mood for Halloween.

With the return of pumpkin spice and all things Autumn, it’s time to scare ourselves silly once again. Fortunately for us, TikTok is chock full of spooky content, ranging from the fun and silly to the actually terrifying. Here’s a selection of the best Spookytoks to keep you scared sleepless throughout October.

The spooky version of true crime buffs, TikTok is absolutely overflowing with paranormal investigation videos. Whether you’re looking for professional ghost hunters, haunted hotel connoisseurs, or unwise experiments with Ouija boards, there’s a lot out there.

Mark and Deanna, who run the channel @cryptids_and_crystals, explore haunted and often abandoned buildings. Producing a mixture of hauntingly beautiful filmography, storytelling, and tech-assisted communication with the dead, their channel is alternately scary, lovely, and fun.

Alex Matsuo (@thespookystuff), a “skeptical believer” and professional paranormal investigator, talks about her own experiences with the supernatural and provides alternative explanations for what seem like ghostly phenomena in your home. Other topics range from demons, ghostly legends, and reviews of allegedly paranormal footage to humorous skits about what being a paranormal investigator is actually like. She also talks about the problematic side of the field, from the tendency to whitewash and engage in queer erasure when retelling the legends behind the haunting to the disrespectful way some mediums and ghost hunters engage with recent, high-profile murder cases.

The Penn Paranormal Society (@pennparanormal) is a group of ghost hunters based in and around Pennsylvania. With a channel full of clips from previous investigations, they also regularly go live while on the hunt. Add in some tours of famous haunted locations and the collection of haunted dolls they’ve somehow acquired, and they’ll have you asking questions before too long.

Some parts of America are more haunted than others. Whether it’s a high concentration of haunted houses or misty cemeteries full of accused witches and vampires, TikTok has its share of story collectors and mediums to help you explore these places safely from behind your phone screen.

Petitflaneur (@petitflaneur), who lists “local ghost queer” in place of a name, is a tour guide in what she describes as a haunted pioneer village. In addition to posts about her daily life, she also takes viewers on virtual tours around the village and goes into details about the history of the different buildings and ghosts on her route. Sometimes, the haunted residents make a guest appearance, making her abort mission and run away mid-sentence, but that’s just the price you pay to work there, isn’t it?

Beckie-Ann Galentine (@mybloodygalentine) travels the length and breadth of New England, one of the spookiest regions of America. Whether it’s vampire panics, witch hunts, or the many haunted cemeteries of the region, Galentine does it all, accompanying everything with highly aesthetic, moody, New England visuals. Her channel is a good choice for the easily scared as it’s full of interesting stories with just a frisson of spookiness rather than full-blown fear.

Amanda, who runs @spookynewengland, also travels New England, exploring haunted places and investigating unexplained phenomena in the area. Her channel is a lot more unsettling than Galentine’s, with some real spook factor to it. One of her most popular videos, with 5.1 million views, is a tour of the Conjuring House‘s basement.

Eenie Edenfield (@saltwavesspanishmoss) is a collector of ghost stories and folklore from Savannah, Georgia. One of the most haunted cities in America, she combines lurking around graveyards with folklore, history, and debunking common myths behind local ghost stories. Despite the skeptical fact-checking, there’s plenty of spookiness to her channel. Eenie’s not out to prove that ghosts don’t exist; she just wants people to get their facts straight.

A purveyor of tales about cryptids, monsters, and hauntings, Jeremy Foster (@modernskald) tells his stories in a deep, soothing voice that helps offset the creep factor while drawing you deeper in. He’s also a committed debunker, taking on misinformation about Indigenous folklore, faked paranormal footage and the endless videos allegedly featuring not-deer currently going around. While the debunking may seem a little killjoy and counter-spook, it’s anything but—after all, when you do find something you can’t explain, it gets a whole lot scarier.

In addition to providing general fun and spooky Halloween vibes, Brittany Petronella (@ghoulplease_) takes you on a trip around Salem and haunted parts of New York, relaying ghost stories, folklore, and the grim history of the Salem witch trials. She’s also a fan of old graveyards, Hocus Pocus, and places with a fun, witchy, or creepy vibe. An eerie video of a cemetery where she felt a weird energy has more than 4.4 million views.

Some people choose to live in haunted houses and collect possessed dolls. Other people come by it unwillingly, because after all, once you’ve sunk all your money into buying a house, there’s not much you can really do if you find it filled with unwelcome spectral roommates.

Soulmori (@soulmori), an artist living in England, chronicles the experiences of her family after her parents moved into an extremely haunted house. Presenting her viewers with what she claims is a mixture of reality and fiction, refusing to say which is which because “it’s more interesting this way,” she takes them through the discovery of haunted dolls, creepy paintings, and other unsettling events. She’s also built up a collection of haunted dolls that she cares for and treats like children, inviting the spirits inside them to do things like help her choose her makeup for the day.

Brianne and Brett (@theghostsandthegays) are ghost hunters who make a habit of seeking out and collecting haunted objects. With regular videos of them scouring thrift stores with an EMF meter, actively trying to find the most haunted antiques out there, their collection is still mostly made up of dolls. And it’s growing.

After living in her new house for a year, Norma Maree’s (@normamaree) dog started behaving strangely, staring at things no one else could see and getting scared for what looked like no reason. It was when they tore up their deck to build a new one that things took a darker twist as they found what looked like a human bone under the concrete (which the police determined was “non-human“). Things have been spooky ever since, and while she’s still a skeptic, the skepticism is getting slowly washed away.