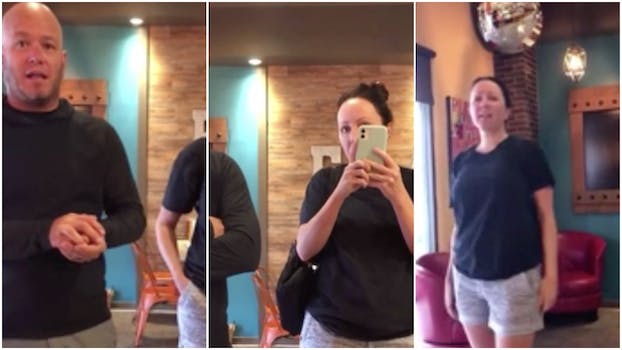 'When all this goes away, we'll never come back again.'

A video trending on Reddit shows an anti-mask Karen couple trying to levy accusations of discrimination on a frozen yogurt shop employee by misuse of the California state law.

The video begins inside a Frapys frozen yogurt shop in Mission Viejo, California. The Karen couple asks if the shop serves the public and has a business license, which it obviously does. But then they make it weirder.

“That means you have to go by all the civil codes in California,” he says. “California civil code 51, look it up.”

“If you’re going to discriminate against me because I have a medical condition, you could be personally sued, and it could be the end of this business.”

The woman with him takes out her phone, takes the employee’s name, and says some nonsense about her and the establishment having to accept responsibility for their discrimination.

Even further, she says, “When all this goes away, we’ll never come back again.”

Karen and Ken end up leaving, realizing they aren’t going to be served delicious frozen yogurt.

Alright, so California civil code 51, or the Unruh Civil Rights Act, starts: “All persons within the jurisdiction of this state are free and equal, and no matter what their sex, race, color, religion, ancestry, national origin, disability, medical condition, genetic information, marital status, sexual orientation, citizenship, primary language, or immigration status are entitled to the full and equal accommodations, advantages, facilities, privileges, or services in all business establishments of every kind whatsoever.”

The problem with the Karen couple’s explanation of the law is that they could not prove a medical condition, which only a doctor detailing the person’s medical state and its remedies in full could provide.

Redditors in the comments arrived at similar conclusions, slamming Karen and Ken, who went in with a dumb plan.

“The funny thing is, if this guy actually believed he could sue this business, and get a payout to the extent where he would “put them out of business” , then all he has to do is leave, call his lawyer, and get his millions,” wrote u/TrumpGUILTY. “Instead, he keeps trying to fight for a cup of frozen yogurt. basically he’s like ‘I could get a million from you, but instead I wanna give you 2.99 for some peach sorbet.'”

“Now, this is all fun and games, but underlines the point that these people don’t even believe a lot of the bullshit they’re spewing. It’s pretty much the definition of double think, and it’s pretty creepy to watch it play out in real life.”