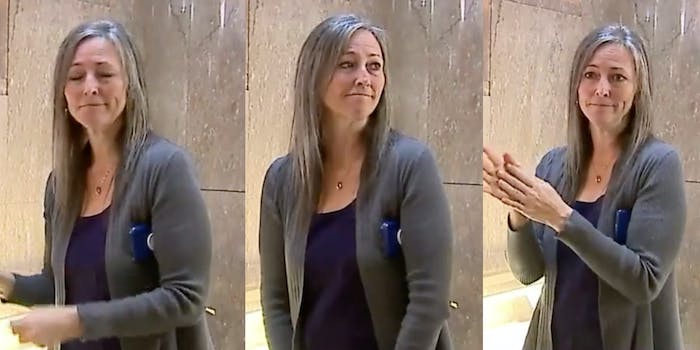 'This should be considered voter intimidation.'

An Indiana county clerk has been dubbed “Indiana Karen” for refusing to wear a mask around voters as they begin hitting the polls.

Early voting began on Oct. 6 for Indiana residents. The Fountain County Courthouse, where clerk Paula Copenhaver works, requires people to wear masks on the premises. At least that’s what all the posted signage says.

Copenhaver, however, disagrees. She’s decided to ignore local guidelines and CDC recommendations, earning her the title of “Indiana Karen.”

Copenhaver claims to not be an anti-masker, but her comments to WISH-TV seem to tell a different story.

Her comments to local paper The Journal Review were similarly revealing.

Indiana Karen’s decision is particularly unsettling given the recent surge in cases in Fountain County. The area currently has an 18% positivity rate, the highest in the state of Indiana. COVID-19 testing is ramping up in the area, with long lines forming outside the Fountain and Warren County Health Department, where tests are being performed.

Fountain County residents are finally beginning to take the virus seriously, but increased testing has also led to an uptick in cases. Recent contact tracing efforts have not linked any cases back to the courthouse—yet.

Complaints are already filing in over Copenhaver’s refusal to wear a mask while on the job. Yet Indiana Karen is standing firm in her belief that mask mandates do not apply to her, even as an elected official.

“I’m not going to tell somebody that they have to wear something, that is not my job, especially an elected official,” she said.

A screenshot of the Indiana Karen story was shared to the r/FuckYouKaren subreddit, where it quickly shot to viral status, earning over 28,000 upvotes. The screenshot shows the WISH-TV story headline and a Facebook comment from an anonymous Karen. Really, though, her name is Karen.

“She needs to be dismissed from her position at least through the voting period!” Karen A wrote of Indiana Karen. “She is putting folks at risk due to her selfish choices! She needs to not be present as folks vote. Period!!!!”

Redditors were immediately infatuated with this “anti-Karen Karen,” or, as one Redditor put it, “Care-in.” They sang Karen A’s praises in the comments and dragged Indiana Karen for her dismissive attitude.

Many Redditors said Indiana Karen’s mask refusal feels like a subtle voter intimidation tactic. The knowledge that a clerk is going maskless may deter people from visiting the polls, particularly those in high-risk groups.

“She’s clearly got a death wish,” one commenter wrote. “Which is her right, but not at the risk of spreading the virus. She needs to be let go for the sake of safety. This is one helluva a way to deter voting.”

“This should be considered voter intimidation,” another added.

Meanwhile, Karen A has become a hero of sorts. One user even referenced Dune in their praise, dubbing Karen A “the Muad’dib of 2020.”

“It was said you would join the Karens, not destroy them,” another commenter joked, referencing 2005’s Star Wars: Episode III – Revenge of the Sith.

It seems unlikely that Copenhaver’s mind will be changed before the election, but that’s the wonderful thing about America. As Copenhaver herself noted, she is an elected official. That means Indiana Karen can be voted out by the same people whose lives she is putting at risk.