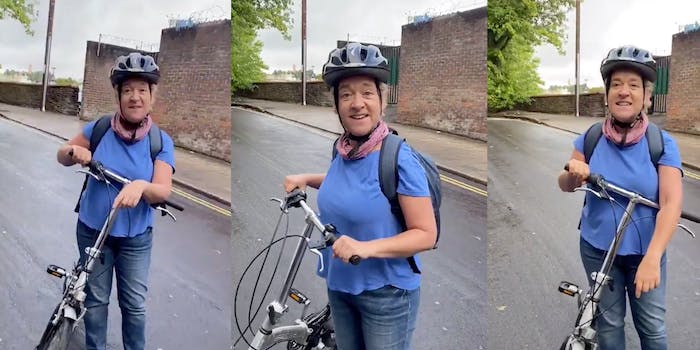 ‘Karen’ accuses Black man of robbing his own car

She later came back to suggest they be friends.

A Black man in Bristol shared on Twitter that he apparently can’t even sit in his own car parked in his own neighborhood without being accused of a crime.

“This morning I was in my car cleaning the passenger seat and this white lady came up to me accusing me of being a thief,” @Akheyre76 wrote on Saturday. “I’ve lived in this area in Bristol for the past 10 years. I’ve been parking my car here for years now and I’ve never seen anything like this before.”

He included in his tweet a video that starts after the woman has made her accusations, but @Akheryre76 briefly recounts what’s going on, and she doesn’t deny it. Instead, she asks him to provide the registration number for his vehicle—the one he is sitting in during the conversation.

“You think I’m robbing my own car because I’m Black?” he asks.

“You look like you’re rifling through someone’s glove compartment,” she responds.

“That’s my flipping car!” he says.

The woman continues to oh-so-politely demand that he prove it’s his car by rattling off the number by memory, and he tells her that she can just call the police if she’s going to be “so racist.”

“Everything comes down to race now, doesn’t it?” she asks.

He eventually relents and tells her the number so that she’ll leave, which she does after attempting to justify her baseless accusations.

@Akheyre76 said the woman came back only a few minutes later in an attempt to “apologize,” presumably to make herself feel better for jumping to conclusions.

“Can I just say, if you live around here, we should be mates,” she actually has the audacity to say to the man she just accused of being a thief.

The video has been reposted to a number of subreddits, including “Fuck You Karen.” Clocking in at 2 million views so far, the original video has caused a shocking amount of controversy online, with some people seeming to take more issue with @Akheyre76’s cursing at the woman for profiling him than with the racism on display.

Fortunately, those people were often quickly shut down by folks who saw the situation for what it was and had no problems sharing why the woman’s behavior was wrong.

@Akheyre76 also followed up to say that he’s been told this woman has made similar accusations against other Black people in the area and that he stands by his response in the moment.

In other words: “Don’t be nice to racists.”