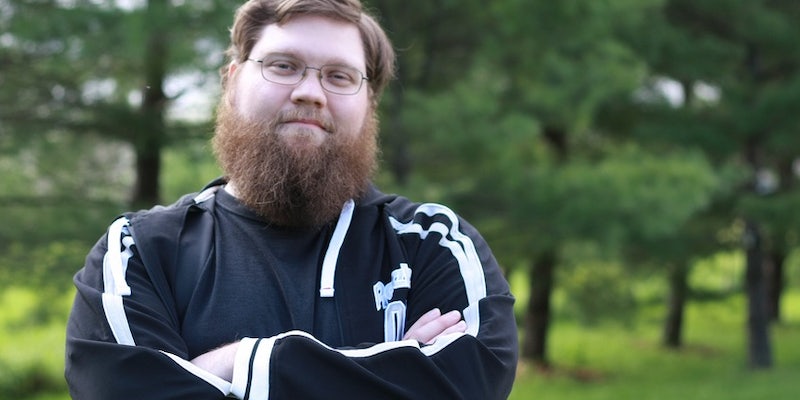 After passing an unprecedented milestone—1 million Wikipedia edits—the Daily Dot caught up with Knapp to talk about his process, inspiration, and the future of the site.

Wikipedia is so massive, it’s hard to conceive of the man-power that makes it a reality. There are just too many articles: 3,931,066 in English alone, in fact. (If you don’t believe me, here’s the Wikipedia article about how many articles Wikipedia has.)

It’s almost easier to imagine an artificial intelligence whipping up all that text through some next-generation algorithm than to picture the reality: an army of faceless volunteers who spend hours every day banging away on their keyboards about topics as obscure as Kenya’s used car import law and the international availability of McDonald’s products.

Well, here’s a name, a face, and a story: Justin Anthony Knapp.

The bearded and bespectacled former pizza delivery guy from Indianapolis, Indiana is a pretty extraordinary wikipedian. Last week, Knapp, 30, became the first person on the site to reach 1 million edits. He’s done it by spending “several hours” every day on the site. Knapp’s never received a cent of pay from Wikipedia and is currently unemployed.

After writing about Knapp’s million edits milestone last week, we wanted to get to know him a little better. The “free encyclopedia that anyone can edit” has its flaws (here’s the relevant Wikipedia article), but people like Knapp, who work hours every day for no pay, deserve some serious recognition. We take the people who’ve created Wikipedia’s almost impossibly expansive collection of free knowledge for granted. We shouldn’t.

So what’s it like being the hardest working person on Wikipedia, and what are some of the challenges facing the site? More importantly, what’s his mom think of his accomplishment?

DD: To start, how much time do you spend on the site?

Several hours. The time between editing sessions for me is usually measured in hours rather than days.

Broadly speaking, I do it for two reasons. Aesthetically, it just pleases me. This is how I relax: I read and write. Finding things to do in this project is a way of passing time that is constructive and fun for me. On the other hand, editing is also a way of actualizing some of my values. I believe strongly in sharing and collaboration so if I can be part of a worldwide, multi-lingual community all dedicated toward giving away the world’s knowledge freely, that gives me a sense that I’m doing a good thing.

As hokey as it sounds, the best article on Wikipedia is the one that tells you what you want to know. Wikipedia is a tool for others to use and it should be the best annotated bibliography in the world. If you want to know about a topic, Wikipedia should be the perfect place to go to find out about what others have said on that topic. I’m always surprised at the kinds of topics that receive featured status (the highest quality of article on Wikipedia): from gumbo to RNA interference, W. E. B. du Bois to the flag of Armenia. It’s really incredible to me that so many knowledgeable persons have contributed so many man-hours to explaining these topics.

DD: Any wikipedian poets the world show know of?

One editor whom I’ve gotten to know well is Adrianne Wadewitz. She produces a lot of high-quality content related to literature, which is a topic where I am mostly ignorant. Editors who can not only write well, but write well about topics that are a mystery to me (and there are many of them) really earn my respect.

DD: What challenges does Wikipedia face?

Wikipedia’s biggest challenge is Wikipedians themselves. Think about it this way: if you are interested in a topic and you want to come to Wikipedia to contribute, you will probably find that it’s been covered already. With almost four million articles in English alone, a lot of ground has been covered. Your ability to add to some topics is very constrained and it can be intimidating to run into a self-regulating community that has been around for 12 years, building its own sub-culture and code-words. Wikipedia generally doesn’t operate under strict rules and that’s usually a good thing, but if you’ve been around long enough, you know how to use the loose guidelines in such a way to get what you want. So when conflicts inevitably arise, more experienced users can game the system to promote their own biases.

DD: On that note, what’s the future look like?

As time goes on, there will be new content to be added to be sure, but many basic topics have already been covered in more-or-less sufficient depth, so the emphasis in the next several years will be upon amending, revising, and rearranging the existing content rather than generating anything new and that is a task that is simply less interesting to most.

DD: What do your friends and family think of your accomplishment?

I have received several congratulatory messages from friends, family, and acquaintances. For a few years now, my friends have introduced me to strangers as ‘the person with the second/third/etc. most edits to Wikipedia.’ I’m sure they will only continue to do this now. My mother got a call from a journalist with an exchange that went something like this:

So then I had to explain it to her.