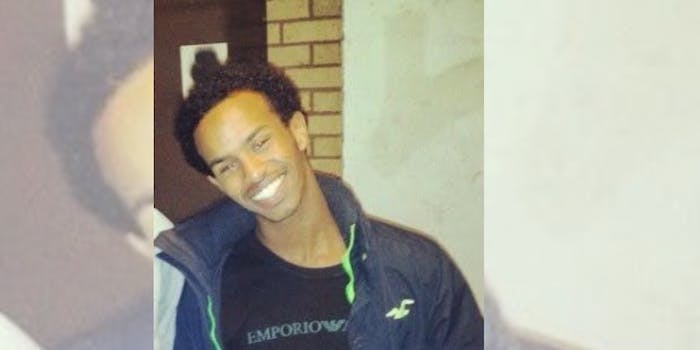 Mohamud Mohammed Hassan's says he was released from police custody with injuries.

People on social media are using the hashtag #Justice4Mohamud to call attention to the death of 24-year-old Mohamud Mohammed Hassan, who died shortly after being released from the Cardiff Bay Police Station in Wales.

According to the BBC, Hassan was arrested at his home Friday around 11pm on suspicion of “breach of peace” and was released without charge on Saturday.

The 24-year-old died Saturday night several hours after being released, drawing suspicion from his family that police assaulted Hassan while he was in custody.

According to the BBC, Hassan’s aunt, Zaniab Hassan, saw him shortly after his release and described him as having “lots of wounds on his body and lots of bruises.” She claimed that he sustained the injuries in custody.

“He didn’t have these wounds when he was arrested and when he came out of Cardiff Bay police station, he had them,” Hassan told the BBC.

The family is expected to launch a justice campaign and has started a GoFundMe to raise funds for “funeral arrangements and legal fees” according to its description.

“The family are devastated by the loss of their eldest son and will not allow Mohamud to become another statistic,” the page states.

In addition to his family, people on social media are calling attention to Hassan’s death. “It’s clear he suffered a tremendous beating,” tweeted Black and Asian Lawyers for Justice.

Hassan’s death is being investigated by the South Wales Police, which described the death as “unexplained and sudden” in a statement released to Twitter on Monday.

South Wales Police said it found no evidence of excessive force and misconduct. The case has been referred to Independent Office for Police Conduct (IOPC), a police watchdog organization that oversees cases of death following police contact.

In a statement, the IOPC stated that it’s assessing the referral and that “CCTV and body-worn video has already been and will continue to be examined.”